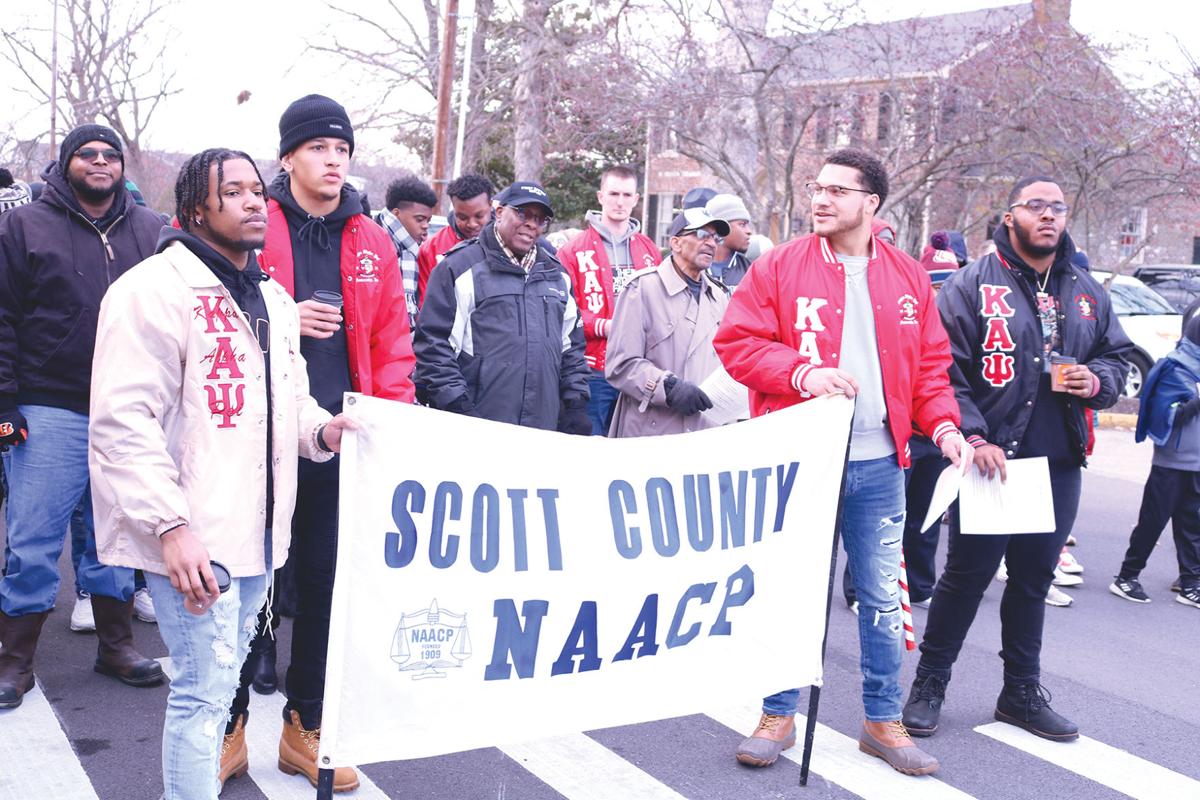 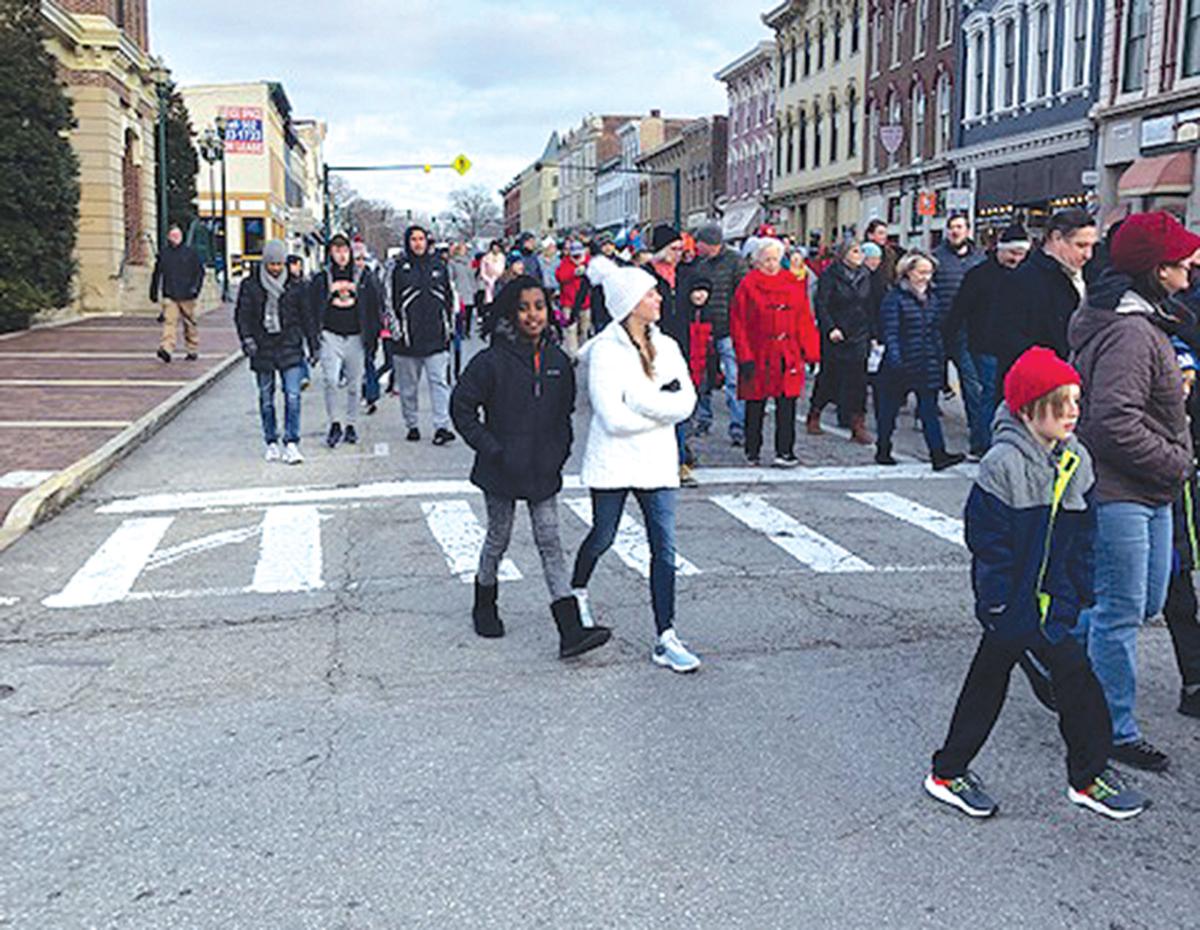 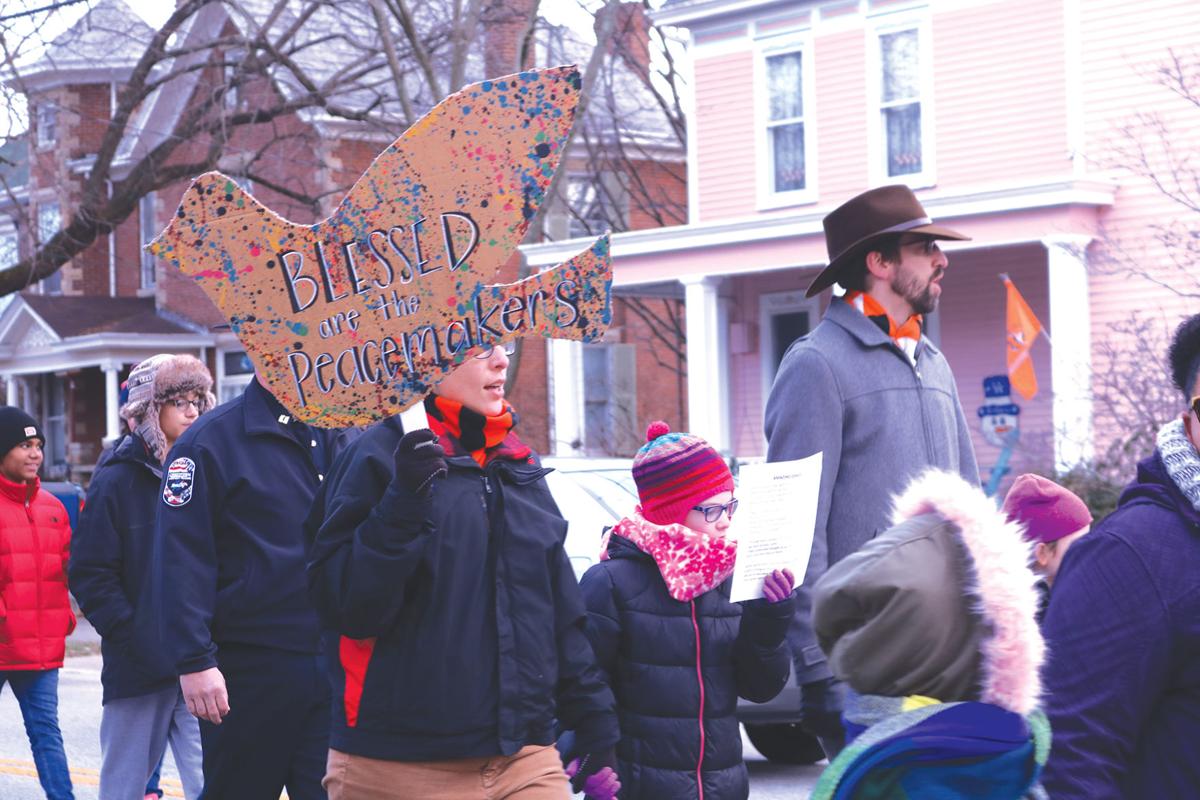 Many participants carried signs in the march, like pictured above. The sign reads ‘Blessed are the peacemakers.‘

Many participants carried signs in the march, like pictured above. The sign reads ‘Blessed are the peacemakers.‘

The sky was blue and although the air was crisp, approximately 250 participated in the Dr. Martin Luther King Jr. march Monday. The crowd completed the parade route in the spirit of hope and unity in recognition of the civil rights contributions made by King over 50 years ago.

Community members gathered in the Cralle Student Lounge on Georgetown College’s campus prior to the march for a meet and greet with special guest Rev. Dr. Aaron Parker. Parker was invited to Georgetown to be the guest speaker at a program later that day at First Baptist Church. He is the senior pastor at Zion Hill Baptist Church in Atlanta, Georgia. A crowd of young college students gathered around Parker to hear his words of encouragement and share their stories about life at college today.

“It’s important that everyone contribute somewhere, there’s plenty of work to be done,” Parker told the students. “This is more than a day of remembrance, it’s a call for action. We need to find the most needy in our community and rally around them.”

The march was followed by the program at First Baptist Church. The program began with a song performed by Great Crossing sophomore Achaia Griggs and comments by William Jones, president of Georgetown College, one of the sponsoring organizations for the day’s activities. The college was proud to help sponsor the event because the college teaches the importance of community service and at Georgetown College, learning is more than just what occurs in the mind, Jones said.

“A Georgetown education is also about the heart, we embrace the parable in Mathew: 25,” said Jones. “The message in that biblical passage is well known: ‘and Jesus said to them, Verily I say unto you, Inasmuch as ye have done it unto one of the least of these my brethren, ye have done it unto me.’”

Musical sections were performed by the high school chamber choir, which includes singers from both Scott County and Great Crossing high schools, with songs focused on furthering the evening’s themes of compassion, service and unity.

Mya Cash, a member of the chamber choir, said it’s important for her high school group to get out into the community.

“We help tell our story through songs, it’s the way we share our stories, said Cash.

Robbi Barber, part of the Georgetown College team that organized the event, then introduced Parker.

As Parker began to speak, he told the crowd that there have been many times people would ask him, “What would Dr. King say to us today?”

Couple gets married over video teleconference

Parker’s words and energetic delivery lit-up the crowd for the next 30 minutes. His words included a concession that racial strife and discord among groups within society is still very much an issue.

“I have come to offer a word of encouragement in these stressed and depressed times,” Parker said. “There is more racism and ideological divide now than in the times of overt discrimination.”

But he added, “Let’s not get tired of doing good… let’s keep moving. Just don’t quit. The tide will turn, our ship will come in and the assault on the world will fail.”

Parker’s speech was followed by a presentation of the song “I Know I’ve Been Changed,” by the chamber choir with several solo artists.

The evening continued with a declaration of appreciation from the city and county to Parker. Mayor Tom Prather and Scott County Judge-Executive Joe Pat Covington presented the document thanking Parker for speaking and complimented Parker on his message, with Covington affirming, “I’m not going to quit!”

Several other event planners and church representatives spoke about the importance of the event and of continuing the event in years to come. Bryson Brooks, from the Georgetown College fraternity Kappa Alpha Psi, also expressed his appreciation for the people who organized the event.

“I’m happy to participate in this event and support Dr. King’s dream, and I really appreciate the time and talent it takes to organize an event like this.”

Do you miss sports?