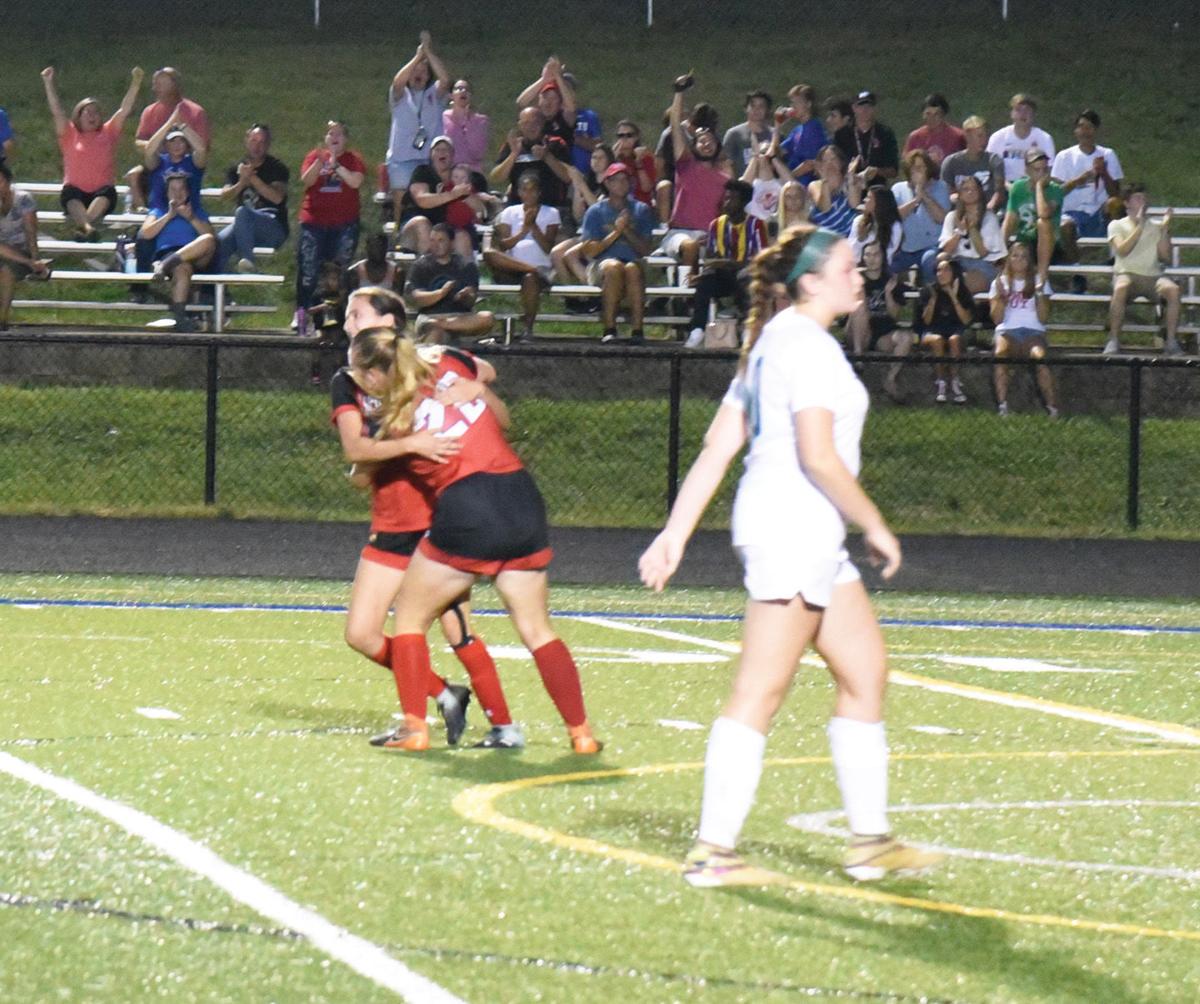 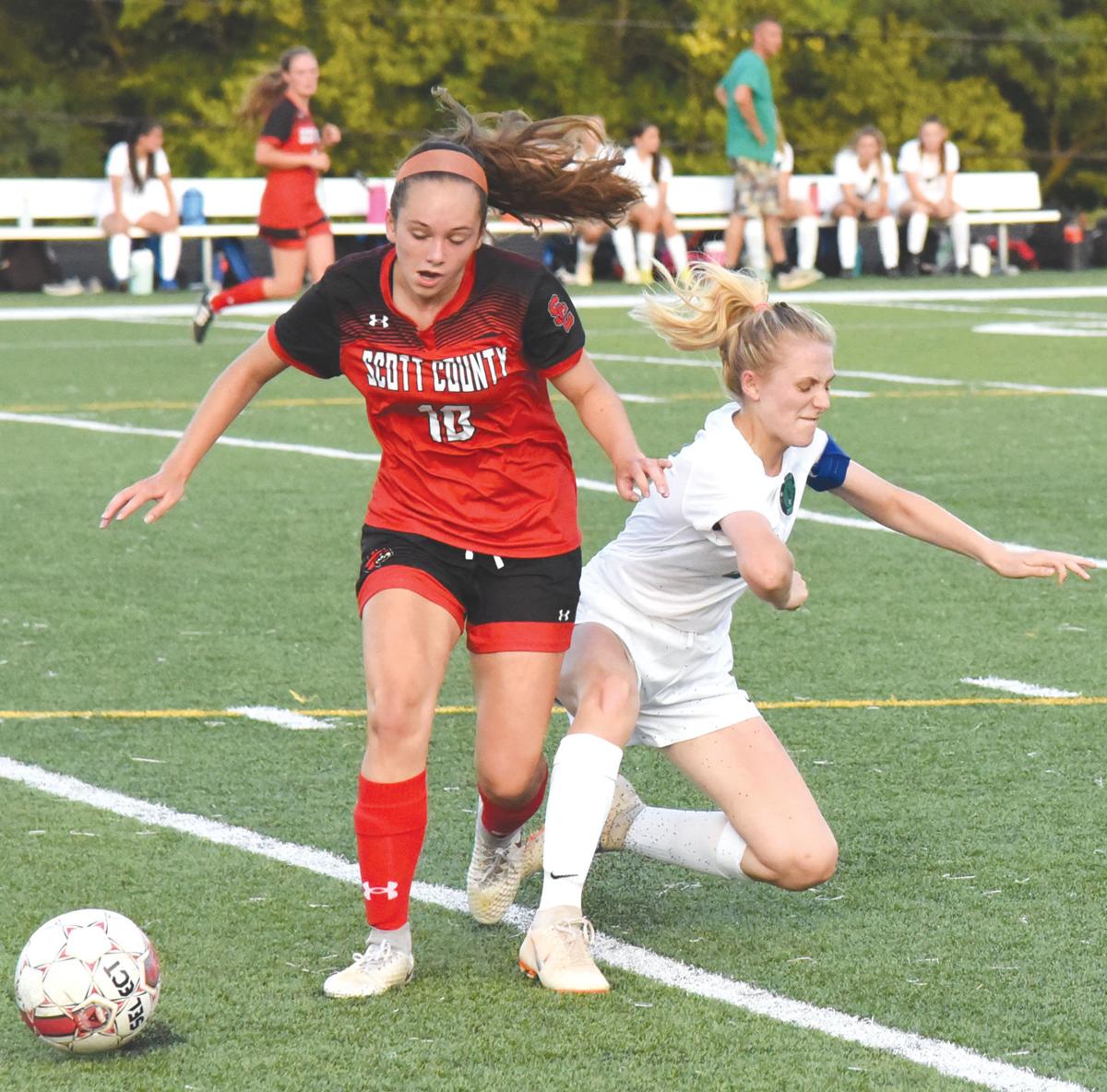 Daelyn Morrison of Scott County, left, and Hannah Washburn of Great Crossing collide while chasing the ball during the first half of their girls’ soccer game Monday at SCHS. The Lady Cards pulled away in the late stages for a 3-0 win. 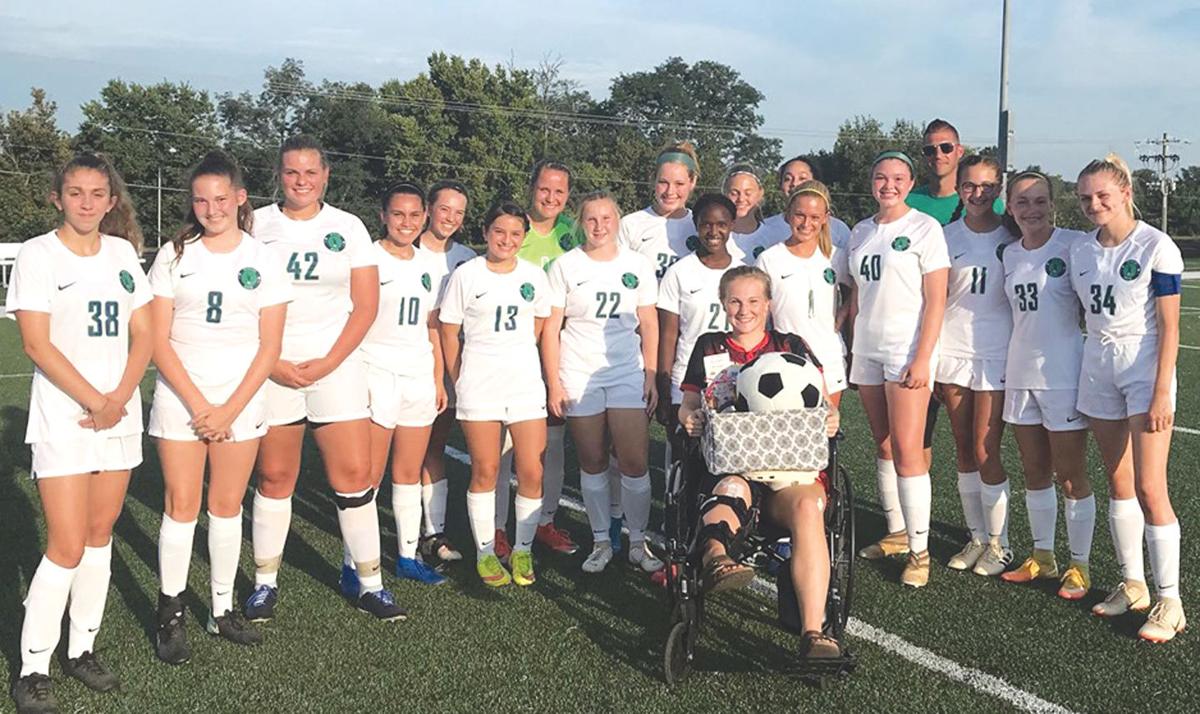 Terrific sportsmanship was on display before the inaugural Great Crossing vs. Scott County girls’ soccer game Monday night. The Lady Warhawks presented a care package to the Lady Cards’ Callie Haywood, who will be out for the season with an injury.

Daelyn Morrison of Scott County, left, and Hannah Washburn of Great Crossing collide while chasing the ball during the first half of their girls’ soccer game Monday at SCHS. The Lady Cards pulled away in the late stages for a 3-0 win.

Terrific sportsmanship was on display before the inaugural Great Crossing vs. Scott County girls’ soccer game Monday night. The Lady Warhawks presented a care package to the Lady Cards’ Callie Haywood, who will be out for the season with an injury.

No, the athletic rivalry between Scott County and Great Crossing can’t claim “throw out the record books” status. There aren’t two sets of numbers and traditions to compare yet.

Based on the extremely small sample of Monday night’s inaugural girls’ soccer game, however, and particularly the first half, tossing aside any and all expectations might be a wise idea.

Heavily favored, senior-dominated SC needed two goals in the final 16 minutes to put away a 3-0 victory on its home turf.

“It was pretty weird that first 15 minutes,” SC coach Scott McKelway said. “I don’t know exactly what was going on. We had all these game plans set. I don’t know if we wanted to win too much and just started making (bad) runs, not making passes. I usually don’t want to yell with anger, but it felt necessary.”

Hill’s goal was the biggest. It was a sharp bender from the right side, about 20 yards away, to double SC’s lead after a frustrating series of fruitless runs.

“My goal, I looked up for a split second, and then I like, ‘Do I have an angle? I’m just going to go for it.’ Then I shot it, and it ended up being really good,” said Hill, one of 12 seniors on the Scott County roster.

The flurry soured a night of spirited play in the defensive end by Great Crossing, which started one senior and only three players with significant varsity experience.

“This is on me. This is on conditioning. I think if we’re in better shape, we compete longer,” GC coach Stephen Brown said. “I don’t have the luxury of subs. It’s a fine balance between trying to get them in shape and trying to not risk injury, and I failed to find the balance, so that’s on me.”

Freshman sweeper Kamri Smith and backs Kyrstin Tillman and Josie Dummer were stellar in the first half. Sophomore goalie Shelby Smith’s several diving saves kept it 1-0 until late in the second.

“You can see what one injury does. It’s 1-0 until we have on injury,” Brown said. “She comes off, then it’s 2-0, and that kind of takes your heart a little bit. We’re young. We’re going to have to learn how to bounce back, how to adjust.”

Scott County has to adjust on multiple fronts, as well.

Playing against opponents with whom they were familiar and consider friends, even if they are not classmates, was no picnic, especially when you’re expected to put it away early.

“We came out, and I was like, ‘Oh, we’re not dominating like I thought we were going to.’ I think we came out just kind of expecting it to be easy, just expecting to be able to pass it around, and they really came out with some high pressure,” Hill said. “We learned to work around them.”

There was also the emotional and physical vacuum of two missing seniors.

Jasmine Giddings and Callie Haywood are out due to injuries suffered in preseason. The Lady Cards, who also were without Giddings and other key players last season, honored the duo by starting the game with only nine players.

“Obviously we’re sad so many people got injured, but our team’s kind of used to it,” Hill said. “We’ve kind of never caught a break. We just picked ourselves up by the bootstraps every season, saying, ‘All right, now we’ve got to kick it into overdrive to make up for the loss of talent.’”

Another SC senior, Emily Harbison, made one save – two minutes into the game – for her ninth career shutout.

Flynt broke the ice with 10 minutes to go before intermission, cleaning up the rebound after a booming free kick from midfield by Reagan OIiver.

Great Crossing fought off every first-half overture from that point. Hustle from the backs and acrobatic play from the keeper Smith canceled out any age advantage the Lady Cards enjoyed.

‘It shouldn’t come from me,” McKelway said of in-game chatter and leadership. “They can probably get better in terms of talking with each other. There are so many veterans that it’s difficult picking captains. Everyone just kind of chips in, instead.”

Scott County will face an even tougher challenge this week with three games in the Fayette County Spectacular, a run that began with a visit to Paul Laurence Dunbar on Wednesday night.

Great Crossing traveled to Lexington Christian at the same time leading up to Saturday’s home opener against Russell.

If the way the Warhawks played their georgraphic rival is any indication, they will have the skil to surprise.

“I think we have the goalkeeper. I think we’re solid up the middle,” Brown said. “Our outside needs some work, but we’re going to do that. We’re going to keep getting better and do the work.

“It’s growing pains. I think we have some future all-state players on this team. It’s just a matter of gelling and developing.”

Kal Oakes can be reached via email at sports@news-graphic.com.

As places continue to open back up, do you think we will see a spike in the number of coronavirus cases?