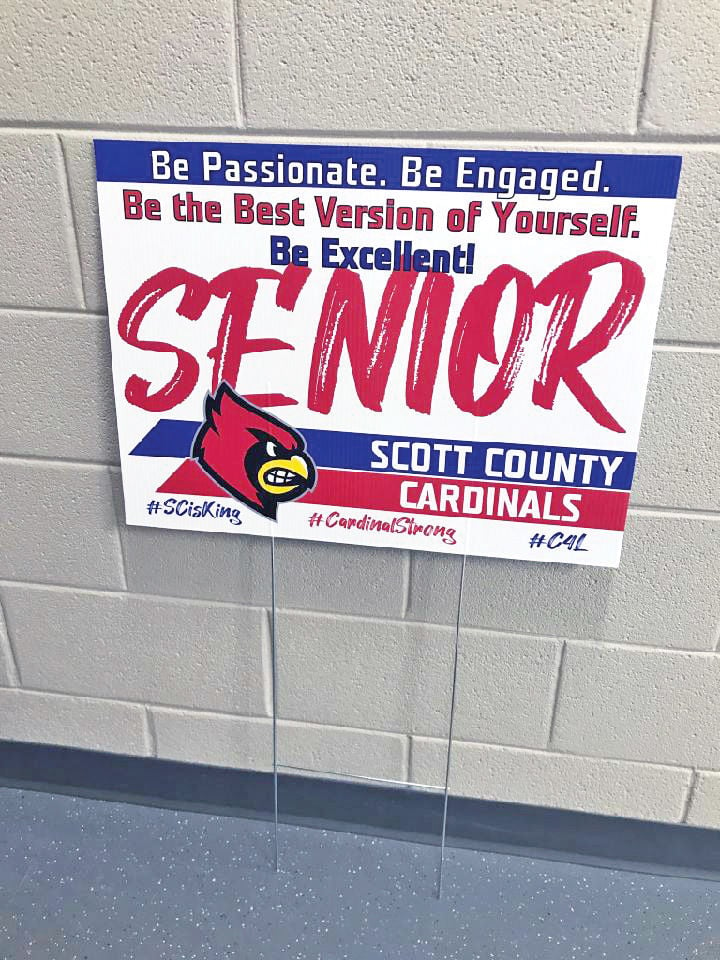 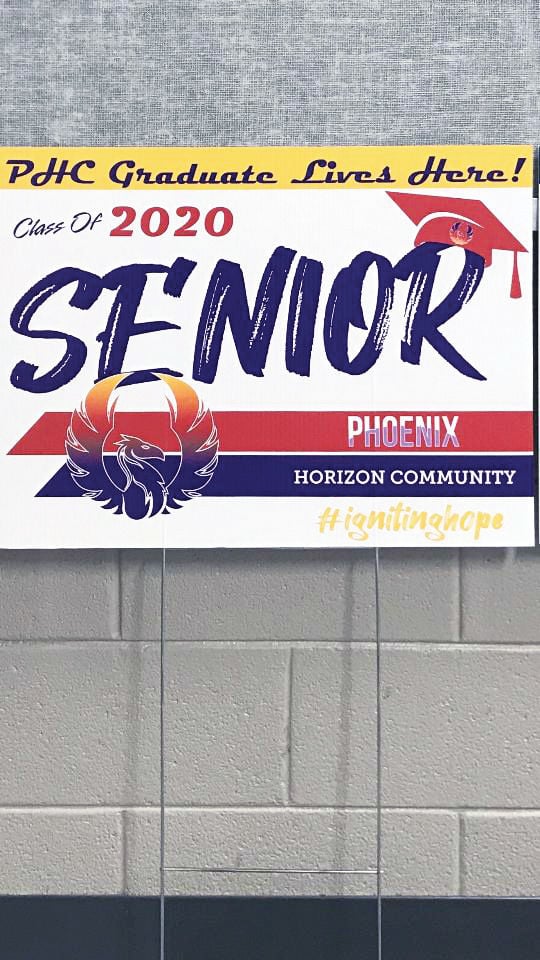 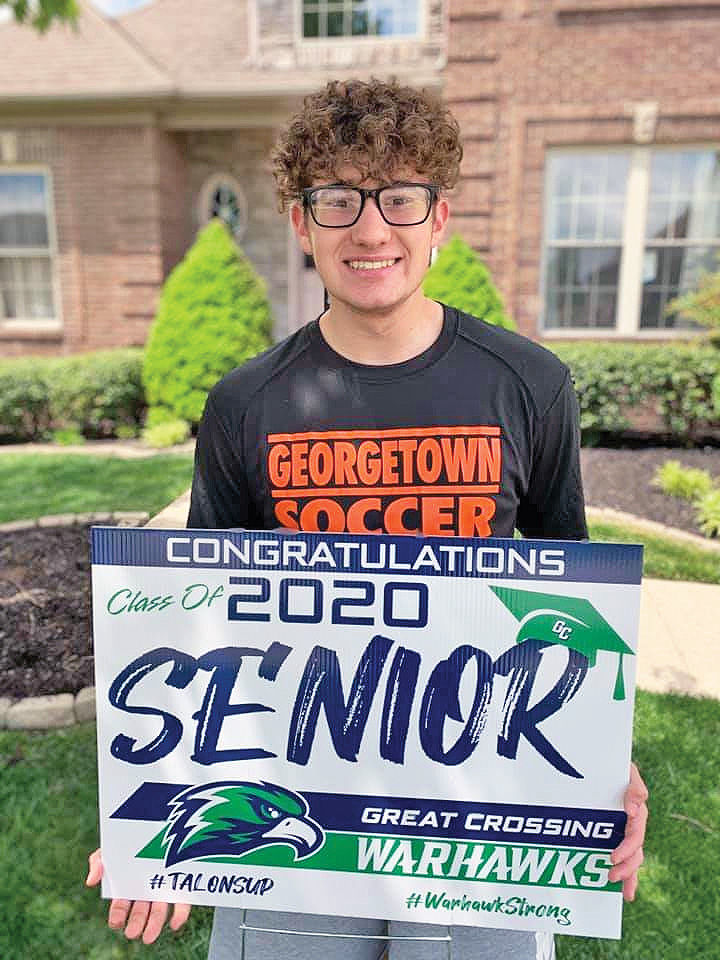 Great Crossing High School senior, Isaac Sullivan, poses with a congratulatory sign that was distributed recently to each member of the Class of 2020. All county high schools are using the signs to help give their graduates a sense of normalcy at the end of this unusual school year.

Great Crossing High School senior, Isaac Sullivan, poses with a congratulatory sign that was distributed recently to each member of the Class of 2020. All county high schools are using the signs to help give their graduates a sense of normalcy at the end of this unusual school year.

‘Tis the season when lawns and gardens receive tender loving care and take on the personality of their proud owners.

Late spring also is the time when high school seniors and their families bask in the glow of their collective accomplishments and celebrate in myriad ways.

Those seemingly disparate activities currently are crossing over, as teachers and administrators from Great Crossing, Scott County and Phoenix Horizon Community attempt to provide a small measure of normalcy and pageantry to a class that has fallen on the hard luck side of history.

Congratulatory signs are popping up around the county, delivered by faculty and staked into yards by seniors and family members whose season in the sun was cut short and forever changed by the COVID-19 pandemic.

“It was with the help of teachers, coaches, administrators, a lot of the same people who have been distributing NTI (non-traditional instruction) work,” Lusby said. “I cannot say enough about our staff members throughout this whole COVID experience. I don’t have to ask. People ask me, ‘What do you need?’”

The task is even larger for principals Meocha Williams of SCHS and Laura Rice of Phoenix Horizon, with 365 seniors having chosen to wear the time-tested Cardinal red in their farewell year.

That’s not the reason the other side of the county’s budding scholastic and sports rivalry waited until this weekend to canvas the neighborhoods, however. It was primarily a matter of timing.

“We wanted it to kick off what will now be the last week of school,” Williams said. “We know our seniors were looking forward to their last week of high school and all the things that usually come with that. They know the signs are coming. They just don’t know when, so at least that part of it is a surprise.”

Volunteers will meet at the high school at 8 a.m., working into the afternoon to ensure that every soon-to-be SCHS or PHC graduate has a chance to plant his or her flag.

Like the Great Crossing signs, Scott County’s have “SENIOR” emblazoned in large block letters. Above that are some of Williams’ familiar catch phrases used to inspire the students: “Be passionate. Be engaged. Be the best version of yourself. Be excellent.” Hashtags at the bottom include the familiar “SCisKing” in addition to “Cardinal Strong” and “C4L,” or Cardinal for Life.

“It should take about four hours,” Williams said of the delivery project. “A couple of our Project Graduation coordinators have taken over getting it organized. Some of our first responders from the sheriff’s department and fire department are coming out to help us deliver as well.”

Lusby said there was no intent to be first or different by sending out Great Crossing’s signs in April. She simply had all the signs sorted and volunteers organized before learning that Scott County planned an similar tribute.

One of the signs adorns the gateway to her own home: Lusby’s stepdaughter, Lauren, is a Great Crossing senior.

“Someone said to me the other day, and it’s true, that they don’t really know what they’re missing unless they have an older sibling. It’s all our preconceived notions about what they’re going through,” Lusby said. “I try to talk to some of our kids every day, whether it’s through Facebook Messenger, Instagram or email, and on the whole, everybody is fine. My Lauren especially is excited about all the things happening.”

Each school’s signs are the first major installment in a series of events designed to give the Class of 2020 its own, unique experience in unusual times. Lusby said there are plans for seniors from all three schools to be represented on the live, rotating billboard at the corner of U.S. 25 and 62.

The principals are enthusiastic about virtual graduation ceremonies, scheduled on consecutive nights for Phoenix (June 11), Great Crossing (June 12) and Scott County (June 13). It is a professional production in conjunction with Herff Jones, the company that supplies commencement caps and gowns,

“There’s a voice actor who says each kid’s name three times. The kids get to screen it ahead of time to make sure it’s pronounced correctly,” Williams said. “Each kid gets a slide. We envision them being in their cap and gown, possibly with a favorite quote and a list of all their activities.”

Williams anticipates performances of “Pomp and Circumstance” and “My Kentucky Old Home” that will provide the traditional mood along with the customary speaking parts.

When Herff Jones first approached the school district to explain the alternative program, Lusby admittedly was “100 percent” against it.

“Then the more I looked into it, I found out how many high schools and college utilize it already,” she said. “This is not anything new at all. The Citadel, for example, uses this. This is how they present their graduation. And it will have all the components of a graduation.

“I will be the first person to admit, did I want Lauren Lusby to be able to walk across that stage as part of the first class at Great Crossing? Of course. But do I want all our kids and all their families to get through this time healthy? Absolutely. We have 1,400 kids and families represented in our school, and I want them all to stay well.”

Both schools still hope to pull together a more traditional ceremony, should conditions and time allow. As of now, gatherings of more than 50 people are expected to be off limits until at least late summer.

“We still have reserved the right to have an in-person graduation,” Williams said. “If there’s any way we could do it by the end of July, before kids leave for college or the military, it’s something we would look at.”

Although the details are still being ironed out, both schools plan a parade around town for their seniors. The likely scenario is to hold the event on the same night as virtual graduation, with the route beginning at 6 p.m., followed by the online ceremony at 8 p.m.

Lusby, who lauded the leadership of Superintendent Kevin Hub as the schools scramble to make unprecedented changes, only half-jokingly told him they might be starting new traditions instead of crafting temporary solutions.

“Who knows? Now every senior class might want a parade,” Lusby said.

Great Crossing’s pioneering leader sees that tendency to embrace the new normal in her own life.

Once a person who hated to bring work home, Lusby has turned her kitchen table into mission control.

“I think this has really changed me,” she said. “I can see myself now being a person who doesn’t need to fix myself up to go to work. It’s a paradigm shift. You dig in and start doing it because you don’t have a choice, and you get used to it. Now all of a sudden it’s been eight weeks doing everything this way.”

While the needs and desires of the student body remain at the forefront, it’s easy to forget their principals also are grappling with new ways to lead and manage their daily workloads.

“Some people take for granted that you must be working less, but you’re still working, and really nonstop,” Williams said. “You’re working mostly from home, so it’s almost like you’re working all the time.

“I’ll have four people wanting to schedule a Zoom meeting for 11 o’clock or something like that, so you just try to manage it the best you can,” she added. “Everybody has been extremely flexible, just bending over backwards to do whatever it takes for the kids.”

Including, but surely not limited to, stop-and-go house calls on a Saturday morning.

Which natural disaster scares you the most?