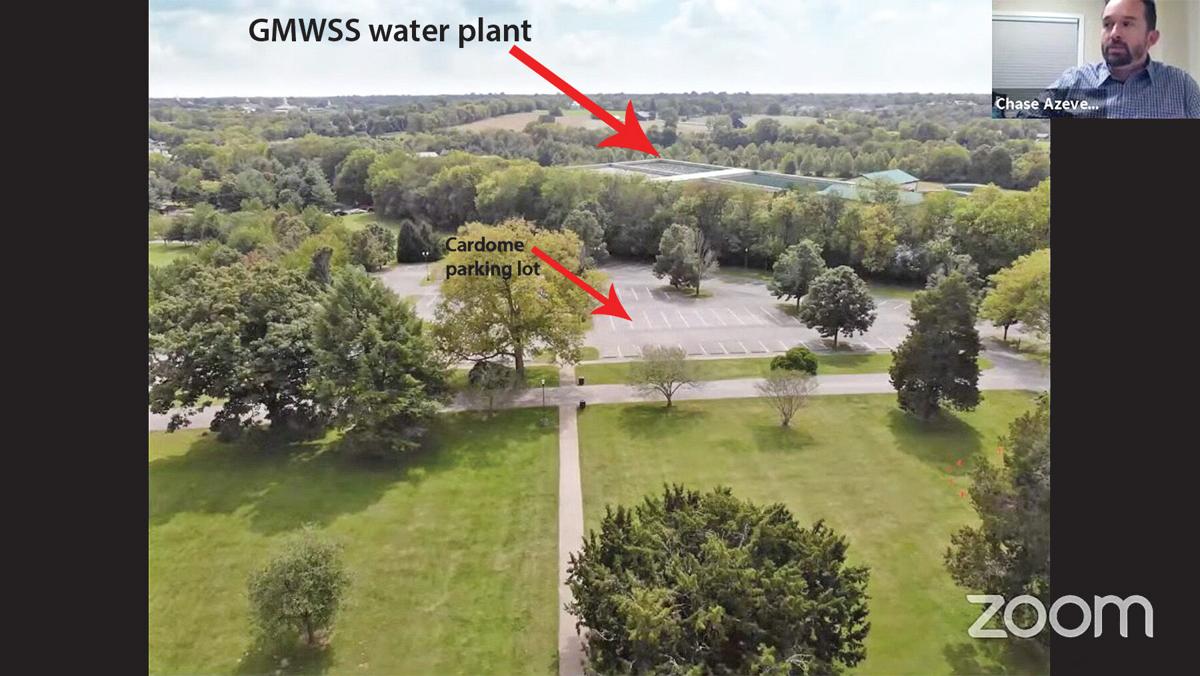 A drone photo of the existing Georgetown Municipal Water and Sewer System’s Waste Water Plant One as taken by the Georgetown Police Department. WW One is hidden behind a shield of trees behind Cardome and on Elkhorn Creek. The new WW One will be constructed on the same site, with a new access road and extensive landscaping to shield the plant. 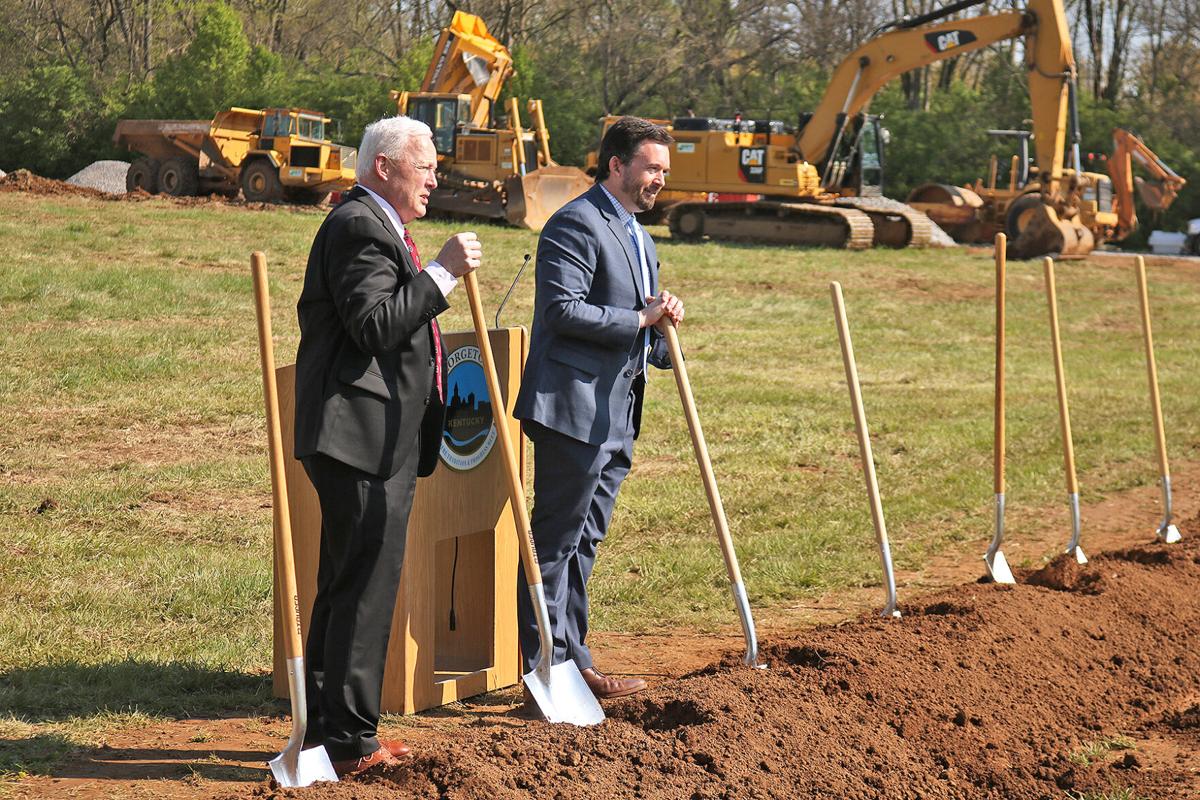 Georgetown Mayor Tom Prather and GMWSS General Manager Chase Azevedo celebrate the groundbreaking for the $49.8 milloin plant that will eventually double the sewage capacity as the community grows.

A drone photo of the existing Georgetown Municipal Water and Sewer System’s Waste Water Plant One as taken by the Georgetown Police Department. WW One is hidden behind a shield of trees behind Cardome and on Elkhorn Creek. The new WW One will be constructed on the same site, with a new access road and extensive landscaping to shield the plant.

Georgetown Mayor Tom Prather and GMWSS General Manager Chase Azevedo celebrate the groundbreaking for the $49.8 milloin plant that will eventually double the sewage capacity as the community grows.

Groundbreaking for the largest project in the city’s history — the construction of a $49.85 million sewer plant — was held Friday in what Georgetown Mayor Tom Prather called a “very significant moment.”

“This has been a long time coming,” Prather said during the March 8 council meeting when the project was officially approved.

Several years ago, the city council and the GMWSS board approved a five-year plan with annual rate increases to upgrade its equipment and run additional sewer lines up U.S. 25 in order to serve several mobile home parks on the Scott-Fayette County lines. Included in that plan was the construction of a new sewer plant to replace Waste Water Plant One.

Construction on the plant will take 48 months with March 15, 2025 as the final completion date, Azevedo said. However, in 33 months “beneficial use” of the plant will be available while the remaining time will be used for landscaping, grading and other non-critical elements, he said.

Judy Construction from Cynthiana was the lowest bidder for the project. Three bids were tendered going as high as $59.3 million. Judy’s original bid was $50.2 million, but equipment alternatives and other deductions brought the final bid down to $49.85 million. GMWSS had estimated the project would cost $50.1 million, so the final bid was well within budget, Azevedo said.

“Nothing was sacrificed,” Azevedo said in accepting the low bid. “This was in Judy Construction’s backyard and they really wanted this project, so they offered an aggressive bid and we benefited.”

The ongoing growth of the community and the continuing decline of the existing plant made this project absolutely necessary, Azevedo said. The last major upgrade to Waste Water Plant One was in 1999, but the structure is struggling with significant failures including flooding issues from the adjacent Elkhorn Creek, overflow issues during the wet season when sewage flows onto the grounds, structural issues, antiquated controls and electronics and abandoned structures that are eye sores and safety issues, Azevedo said.

He showed council members photos of a concrete walkway that recently collapsed sending an employee into the waters below.

“It is only by the grace of God he did not drown,” Azevedo said.

The new plant will be located on the existing site behind Cardome, near the Elkhorn Creek on U.S. 25, he said. Seven sites, including the existing site were considered, but the cost of moving the site soon proved to be too costly, he said.

“A new site would have involved a redirection of 15 sanitary and sewer lines and gravity force mains,” Azevedo said. “That would likely have doubled the cost of the project and lengthened the construction schedule.”

Fmr Rep. Jane Harman on the crisis in the Middle East

The new plan will include a new treatment process, which required an extensive permitting process, he said.

“We will be moving away from ditches,” Azevedo said. “Everyone will be in one concrete building with a sequencing batch reactor and a pre-treatment plant.”

Sequencing batch reactors is a new sewage process that involves multiple stages to separate parts of sewage and reduce sludge, according to Water Research, a journal of the International Water Association. The process is best known for separating toxic pharmaceuticals from raw sewage, but is gaining acceptance as an advanced form of waste water management.

The new design will repurpose the existing plant, including the use of the existing ditch to capture any overflow and prevent it from spilling onto the grounds or into the nearby creek.

Extensive landscaping is included in the bid to shield the plant from view as much as possible, Azevedo said. A new access road will be constructed and part of the existing site will be turned into a park or trail area for the city and a bridge across Elkhorn Creek will be made available to the public.

“This project is extremely important,” he said. “It is important for housing, retail and commercial development. The facts are there is now limited capacity. So, this is absolutely the right thing to do. It is critically important.”

Council member David Lusby pointed out that the limited sewage capacity not only affects new development, but could impact existing businesses that may want to expand.

So far, the limited capacity has not cost the county any new development, but Conner added there are prospects in which it could influence if this sewer plant were not in the plans.

Waster Water Two is undergoing a re-permitting process which will increase its capacity. GMWSS and Toyota Motor Manufacturing Kentucky have an agreement that provides a specific amount of sewage capacity for TMMK. Recently TMMK has agreed to temporarily reduce that agreement to allow GMWSS to use that sewage capacity elsewhere while Waste Water Plant One is under construction.

The mayor alerted the council that in anticipation of reaching sewage capacity at Waste Water Plant One before the new plant is constructed, the GMWSS board is developing a set of policies that will be used if necessary.

GMWSS is owned by the city.

Will you continue to wear a mask in public since several businesses have dropped the mandate?