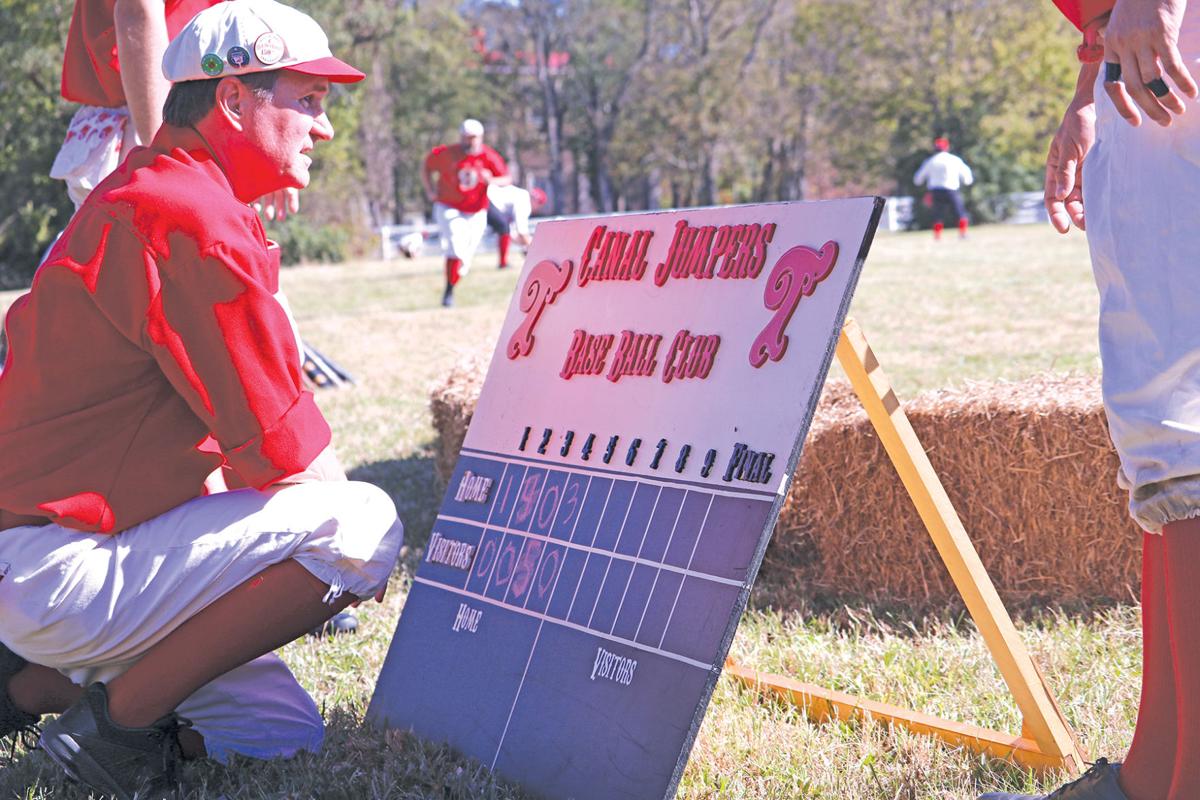 The Blackbottom 9 and Tippecanoe Canal Jumpers, both out of Ohio, faced off Saturday at Ward Hall in a vintage baseball exhibition. 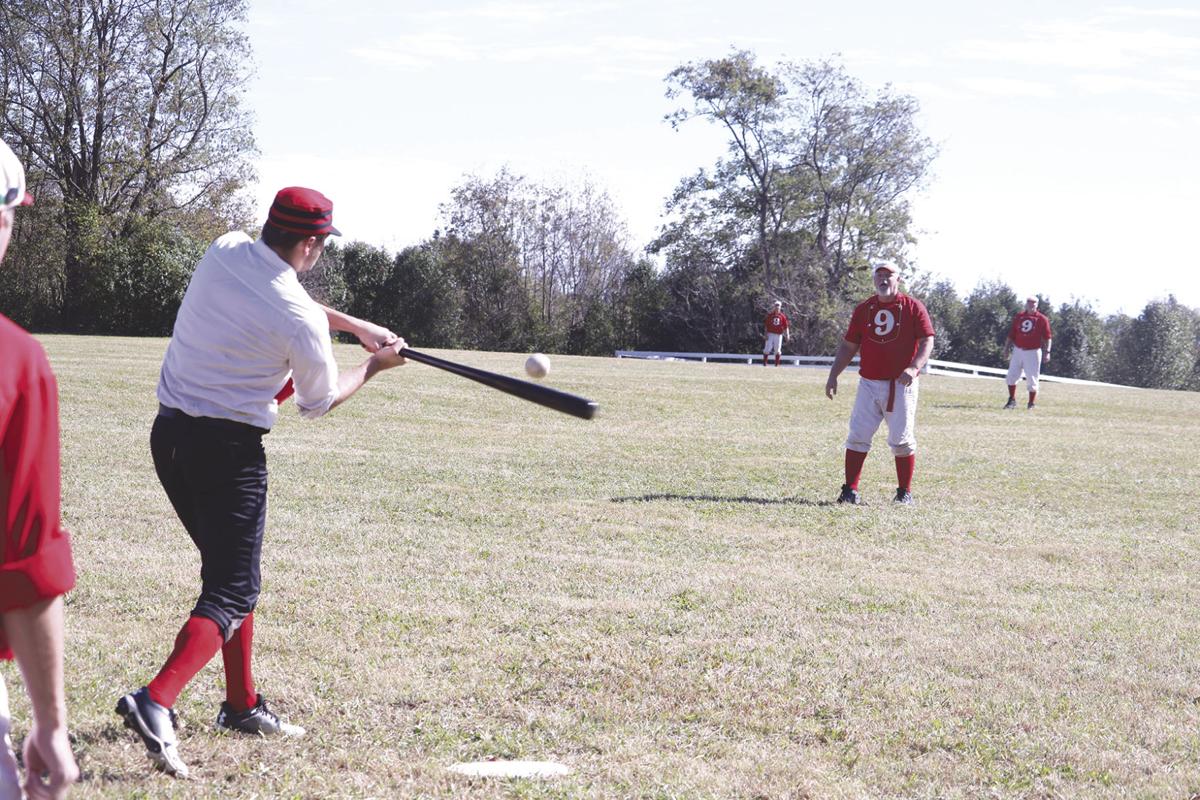 The Blackbottom 9 defeated the Tippecanoe Canal Jumpers 26-10 in the exhibition game Saturday at Ward Hall.

The Blackbottom 9 and Tippecanoe Canal Jumpers, both out of Ohio, faced off Saturday at Ward Hall in a vintage baseball exhibition.

The Blackbottom 9 defeated the Tippecanoe Canal Jumpers 26-10 in the exhibition game Saturday at Ward Hall.

Saturday afternoon’s bluebird sky and autumnal breeze at Ward Hall reinforced some of the reasons baseball became known as the national pastime.

“Strikers” swinging the “timber” during the Greek Revival mansion’s 10th annual Vintage Base Ball Day faced away from distant but visible U.S. Route 460 — an intentional arrangement for historical ambiance, according to event organizer Tommy Druen.

The only recurring sounds in the earshot of 100-or-so spectators were the crack of the bat, the light crunch into a hot dog, some genteel razzing among participants, and the ceremonial ringing of a bell after every run scored.

Oh, and plenty of appreciative applause for the Blackbottom ‘9’ and Tippecanoe Canal Jumpers, two teams that made the round-trip trek of three hours or more from Ohio. Their mission: A little friendly competition, coupled with a history lesson for diamond devotees of all ages.

“Hay fields, this is where they played for entertainment back in 1860,” Tippecanoe captain Brett “Quick Step” Hanselman said. “We’re creating history every time we take the field. Those guys back then, they did it for entertainment. We’re doing it for the same reason.”

Blackbottom won the fundraising exhibition, 26-10, and donated its honorarium back to the Ward Hall Preservation Foundation. Its other prize was a bottle of bourbon, graciously shared in a toast with its vanquished opponent.

The team’s only real motivation, said captain Jim “Colonel” Mattingly, is a love of the sport and its rich traditions. It has led them far and wide to such locales as St. Louis, Detroit and Nashville, where they play a pure, throwback version of America’s most enduring, generational stick-and-ball endeavor.

“It’s a gentleman’s game. It’s not softball, blood and guts, scrapping for everything,” Mattingly said. “We laugh as much as we play ball. We have a good time with everybody that we meet. Somebody makes a good play, somebody has a good hit, you congratulate them and keep going.”

Players wore uniforms true to the post-Civil War period: Baggy tops, short pants, high stockings and rudimentary cleats. Their benches and the backstop were made up of donated hay bales.

Baseball has been known for its catchy nicknames from day one, and at the end of a brief, pregame address by the captain, each player introduced himself by yelling out that moniker. Rain Man, Shark Bait and Scooter were Colonel’s sidekicks. Bear Claw, Bullfrog, Curly and Fireman shared the field with Quick Step.

Players wore no gloves, an environmental hazard somewhat tempered by a “lemon peel” ball that has a slightly squishier feel than today’s tightly wound horsehide.

“It’s softer than a baseball by about the sixth inning,” Mattingly quipped.

The pitcher is placed substantially closer to home plate than the 60 feet, six inches of the modern game. His job is to throw underhand, and with a looping arc, similar to slow-pitch softball.

“That’s a perfect example of how the game started as just exercise and fun,” Mattingly said. “The batter actually can request for the ball to be put in a certain location. The idea was to put the ball in play.”

Even without padding on their palms and fingers, the barnstorming teams turned a few double plays and running catches that belied the football-like score at day’s end.

Players helped explain a few different nuances to the spectators as situations warranted. A catcher could collect a foul tip on one hop for an out. Also, the infield fly rule hadn’t been invented yet.

Vintage ball attracts a wide range of participants. The captains are middle-aged with a long background in men’s softball. Other teammates are barely out of college.

Hanselman admitted he thought the concept was “a little silly” when a neighbor made the recruiting pitch a few years ago. One play date, however, and he was hooked.

“The love of the game and just the camaraderie. That’s the appeal, just the fun of being out and playing ball,” Hanselman said. “This is one of our bigger crowds. It’s usually wives. You try to pick a public venue where you might pick up some people. We play in Tipp City Park, which has a walking track and a bike track. People stop just out of curiosity, and they stay and watch for as long as they can. I don’t think that was chosen by mistake.”

Mattingly joined the fun about 15 years ago, when his wife was in charge of preparing the pretzels for a large tournament in Cincinnati.

“There was a play hit to right field,” Mattingly recalled. “The guy was on first,and he ran to third. The throw comes in. The umpire calls him safe, and the runner stood up and said, ‘Sir, I believe I was out.’

He walked off the field, and I was hooked. I fell in love with it, and I’ve been involved ever since.”

Players in Little League uniforms were admitted free to the event. Four of them stayed to pose with the teams for the group photo to commemorate the day.

Both captains said those moments help justify the many highway miles and lost weekends devoted to their unique hobby.

“Just being out there, active. It gets you out of the house and keeps you in shape, somewhat,” Hanselman said. “We’ve got some guys out here like myself over 50 years old now, and we’re still out here playing like kids. We love it.”

Several hundred vintage teams are active across the country. There are sizable pockets in the Midwest and Northeast, both cradles of the game’s early days.

A Lexington-based team is Kentucky’s only outfit, and Mattingly hopes his team’s stops at the end of its annual barnstorming tour will help it catch on here.

“All us old guys that used to play softball together started the team up, and you try to get new blood, new legs every year,” Mattingly said. “That’s kind of how we sustain ourselves.”

Blackbottom 9 has anchored Ward Hall’s tribute to baseball’s halcyon days since its origin. Perfect weather was a welcome sight after rain-outs in 2017 and 2018.

“We want to use the property well, because that’s what people did at the time, and nothing matches up with the 1860s better than the beginnings of baseball,” Druen said.

Which of these is your favorite summertime treat?