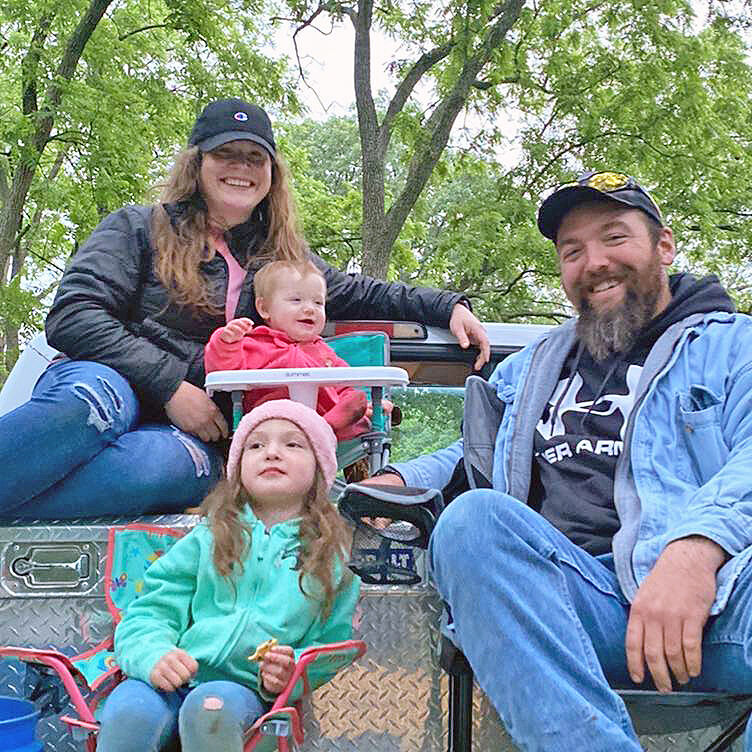 Jim Padgett with his long-time girlfriend Maddy Duckworth and their two daughters. 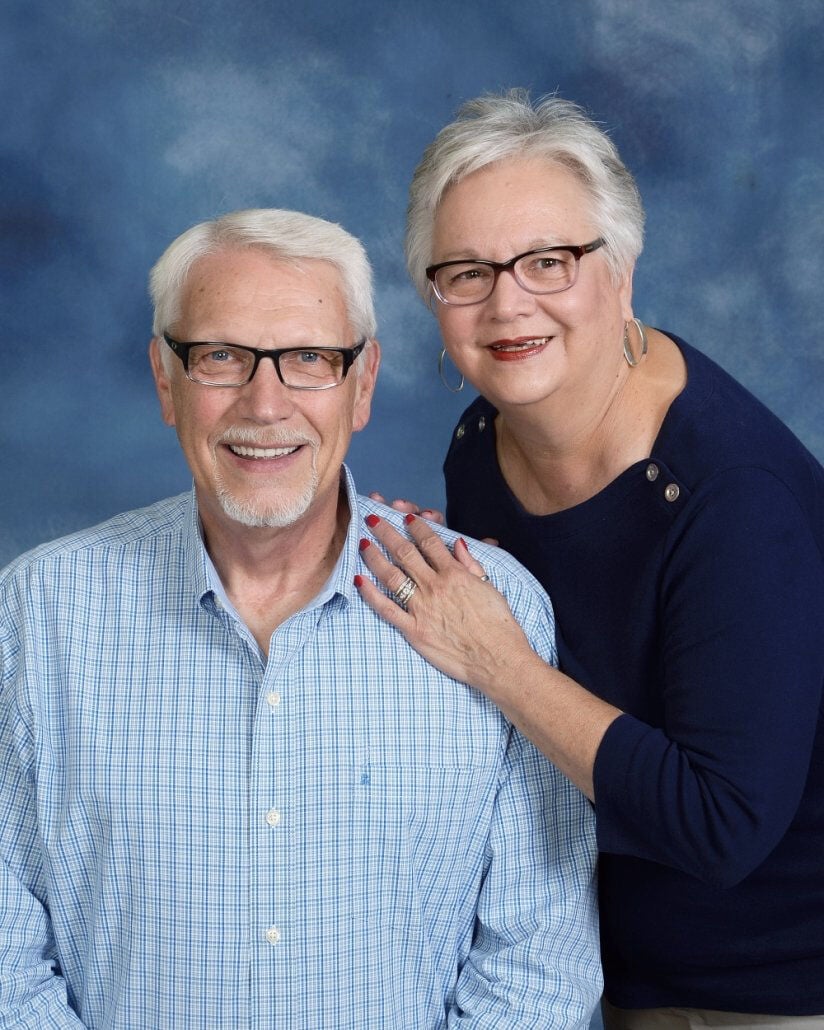 Jim Padgett with his long-time girlfriend Maddy Duckworth and their two daughters.

Darrell Taylor, the pastor of Cedar Grove Baptist Church for 48 years died Thursday from the COVID virus. On the same day, Jim Padgett, an Army veteran and father of two, was killed from a welding explosion in Jessamine County.

Padgett, 31, had plans to propose on Friday to his long-time girlfriend Madison “Maddy” Duckworth and the mother of their two girls, five years of age and one year-old. Originally, he planned to propose last week, but the ring he had ordered had not arrived, so he told family members he would propose Friday.

“I had no idea,” Duckworth said about the proposal. “His mom told me when we were on the way to the hospital after the accident. I had no idea. He never got the opportunity to ask.”

Padgett was a gentle giant, who loved his daughters dearly, she said.

“He was a big man, but he had the biggest heart,” she said. “He was just a big teddy bear. He was kind. He was honest. He was gentle. He had two little girls and they had his heart. When he looked at them you could just see it. He would beam with pride.”

The couple met through mutual friends almost seven years ago.

“I knew who he was, so we kinda knew each other,” Duckworth said. “He came into Buffalo Wild Wings one night while I was working. We added each other on Facebook the day after. We went on a date within a week and we literally have been inseparable since then.”

A welder since high school, Padgett made many gifts for Duckworth, their daughters and his family. These include a rose, a man kneeling with a flower and a daisy pencil holder for his oldest daughter, she said.

“His mom has tons of things he has made,” she said.

Oldest of six children, Padgett was fatherly to his siblings as well, Duckworth said.

Padgett graduated from Scott County High School in 2009. He and Bryan Hudson share the school record for the PowerClean lift of 315 pounds, said Cardinals head football coach Jim McKee. He was an offensive guard on the 2008 Cardinal team that lost in the region finals.

“He worked so hard,” McKee said. “He had a lot of God-given talent, but he worked hard too. I’d say his ability was 30 percent God-given, and 70 percent work ethic. We don’t have a lot of SEC-caliber players here, we are mostly just blue-collar Americans who work hard. Jim was everything good that represents Scott County High School. I was devastated when I heard the news. Just an awesome young man.”

Austin Conway posted of his friend.

“Jim Padgett was a beacon of integrity, morality and just all around purity on the football field and in the classroom. He always went back to run alongside those who were  struggling to finish the mile or the lap. Never leaving anyone behind,” Conway wrote on Padgett’s Facebook page.

There are multiple fundraisers planned for Padgett’s family. A GoFundMe page has been set up by the Soldiers 979 Engineer Company, his U.S. Army unit. A Memorial Ruck, a military-style hike, will be held Saturday, Sept. 11 at 3 p.m. at the Legacy Trail in Lexington. The ruck will be family friendly so children can ride scooters or bikes. On Friday, Sept. 17, at 6 p.m. a memorial ride will be held from Man O’War to Frankie’s Plaza at 540 Hecks Plaza Dr. in Morehead, with a portion of the proceeds going to the family. Several Georgetown businesses, including Fava’s Restaurant, have jars collecting funds, as well.

“If it doesn’t show what kind of person he was by all that is going on in the community, I don’t know what would,” Duckworth said. “He was good in all aspects. He was a good person. A good son. A good father. A hard worker. Everything they are doing just shows how good of a person he was.”

Some type of memorial may be held at a future SCHS football game, although no specific plans have been made.

Funeral arrangements have not been made at press time.

The pastor’s death was announced on the church’s Facebook page.

“Brother Taylor has gone on to be with Jesus in Heaven worshipping our mighty God,” notes the church’s Facebook page. “He now knows the unknown, and we are thankful for God’s mercy.”

Taylor is survived by his wife of 39 years, Judy, three children and six grandchildren. He retired from Randall’s as a meat-cutter after 20 years and worked as an associate with Johnson’s Funeral Home, here in Georgetown, for the past 20 years.

Rob Patterson, the evangelism team leader for the Kentucky Baptist Convention, praised Taylor in an interview with Kentucky Today.

“Darrell was a kind soul who pastored Cedar Grove for 48 years,” Patterson said. “The fruits of his faithful shepherding were easy to see as out in Stamping Ground, you would find this vibrant inter-generational church. They always treated guest preachers, like myself, with incredible kindness, generosity and honor. I believe this is because they had come to love their pastor so deeply.”

David Stokes, the mission strategist for Central Kentucky Network of Baptists and who has substituted for Taylor during his illness, said the pastor’s work was obvious.

“He will be mourned and missed, but the fruit of his labor will continue to make an eternal difference and I believe he was greeted with the words, ‘Well done my faithful servant.’ Indeed, well done Pastor Darrell,” Stokes said.

“Oh my heart is breaking at this news! He is truly one of the best people I have ever been blessed to know,” wrote Traci-Jo Mendez Campbell.

“Bro. Taylor baptized me in Elkhorn Creek at Peaks Mill over 45 years ago,” wrote Lisa Carroll Starns. “I babysat his children many times. I am beyond sad to hear of his passing but know that he rejoices in heaven at this moment.”

“I have never known a more gentle, honest, dedicated, loving and most of all Godly man,” said Brett Cool. “Brother Darrell taught me more about being a man and a Christian. He was a very bright light in this world.“

Funeral services were held this past weekend.

Taylor is Scott County’s 39th death due to COVID and the third since the delta surge began in late July. WEDCO does not yet include Taylor in its Scott County statistics because he passed away in a Lexington hospital. The state conducts regular audits which will eventually update the local statistics.

James Scogin contributed to this article.

Do you support a Test to Stay protocol for Scott County Schools?