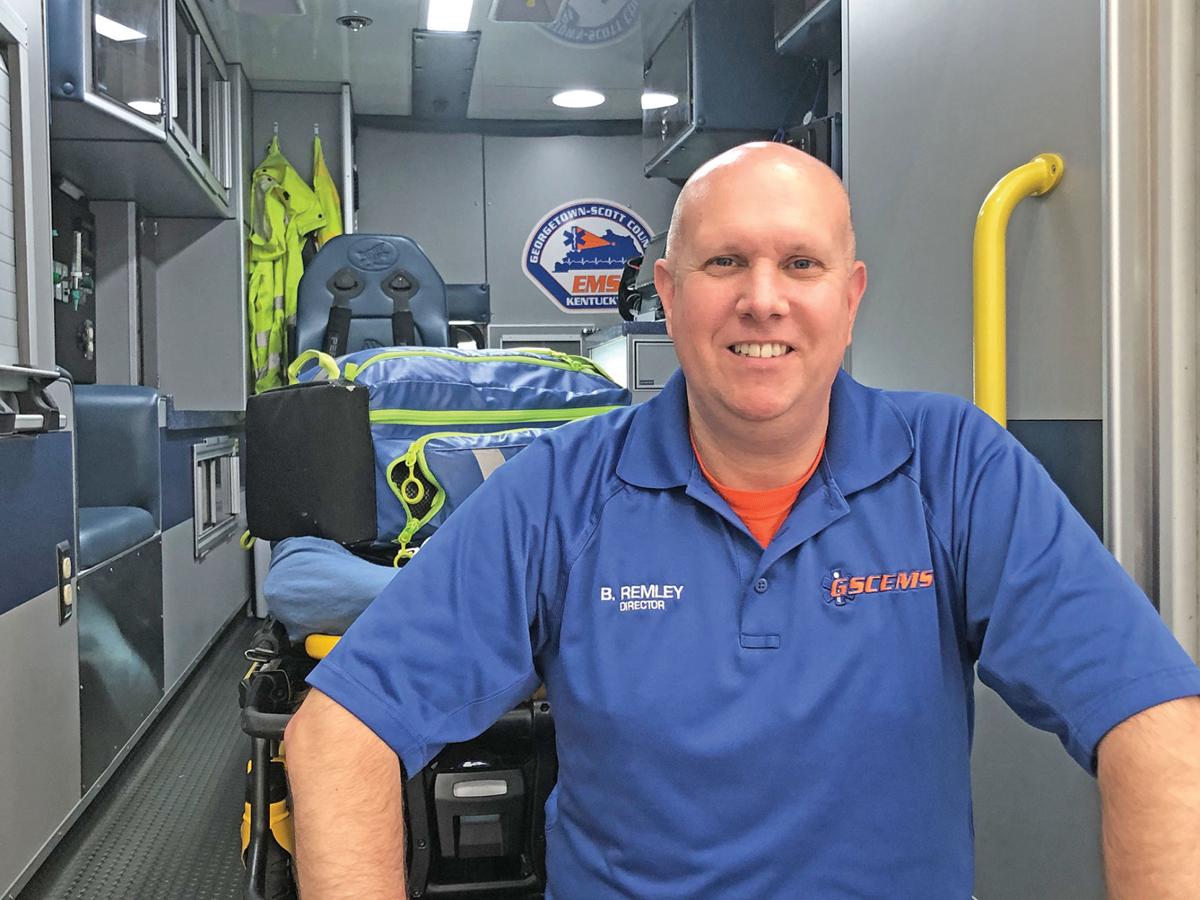 Brandon Remley has been with the Georgetown/Scott County Emergency Medical Services since 1999. 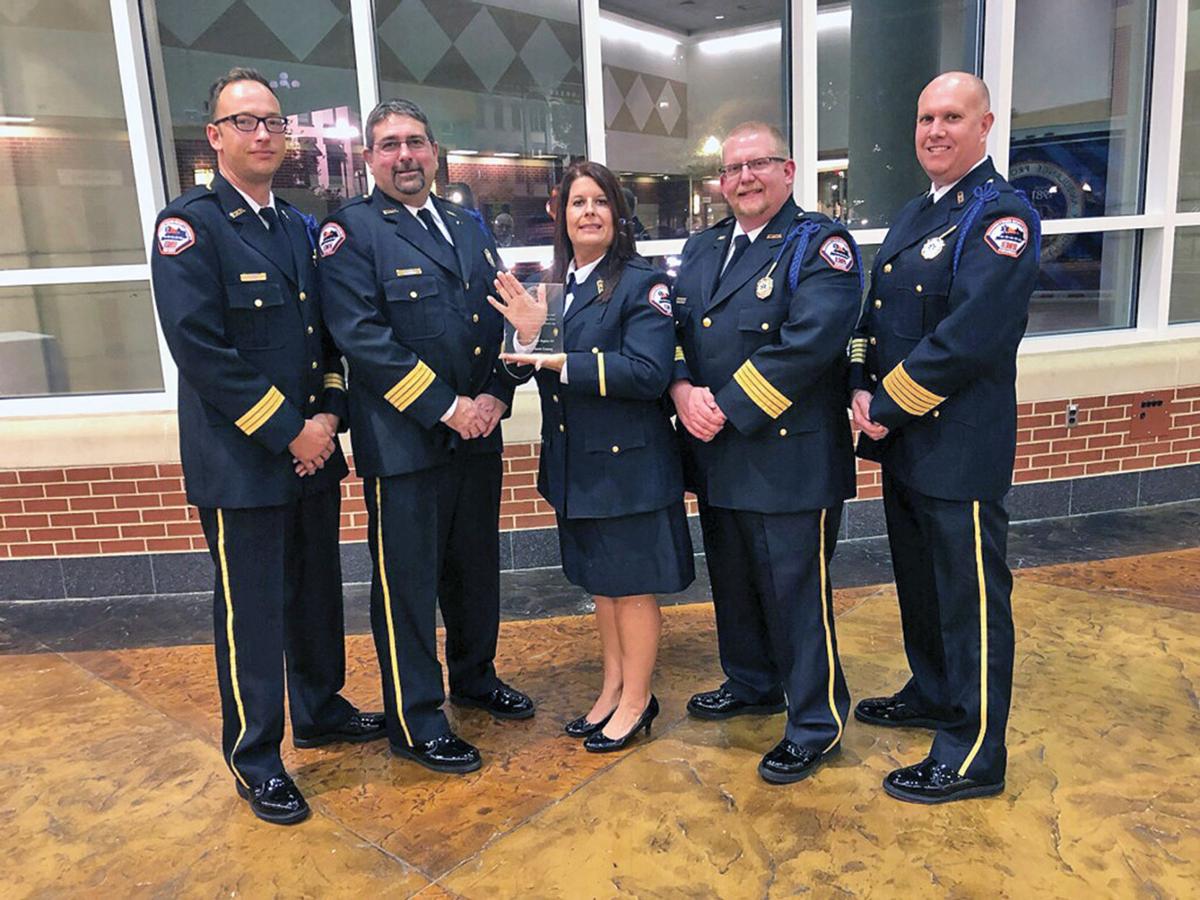 Brandon Remley has been with the Georgetown/Scott County Emergency Medical Services since 1999.

Way back in the day, long before Brandon Remley began his career, funeral homes oversaw emergency services. If there was a wreck, if someone was injured or ill, the hearse would show up.

If you survived, Remley said, well, they’d take you to the hospital.

If not, the hearse headed back to the funeral home.

That history of emergency care basically as a transport service lingers in the public consciousness even today, said Remley, who is retiring this month after serving with the Georgetown/Scott County Emergency Medical Services since 1999.

But in his time with the organization, including several years as director, emergency services have evolved to the point where an ambulance is basically a rolling emergency room. And, he said, the advanced care has meant saving lives.

Judge-Executive Joe Pat Covington said Remley’s thoughtful, steady leadership has made a difference in attracting the support of the fiscal court to maintain and expand emergency services.

“He is just a true asset to the community,” Covington said.

“You just can’t put a dollar figure on it, you just can’t,” he said. “But I can tell you when I go to bed at night, I know that the community is well taken care of.”

A career in emergency medicine wasn’t really in the cards for Remley in the beginning.

Remley said it started out just a summer class in 1994 that he took for something to do. But he liked being of service and his burgeoning career coincided started in Boyle County at a time when traditional volunteer emergency services were becoming professional.

He found out pretty quickly that “patient care is really what I enjoy,” he said.

Covington said that when a community has a well-run emergency health system, it can be taken for granted. When people in Scott County call 9-1-1 it’s assumed the response will be quick and well-trained.

Remley said it is often not until someone needs the service for themselves or a loved one that people recognize how much EMT care has changed. Remley has led the team of 44 employees to recent awards in treating heart patients and for having excellent training and care of pediatric patients.

He cites a small but significant achievement in treating heart attack patients. Traditionally, he said, only about 8 percent of patients suffering a heart attack outside of a hospital survived. That has changed significantly. That’s, in part, because more people in the community are trained in CPR and can help stave off organ failure until the professionals arrive.

But it is also because of the skill, equipment, and training of the teams when they arrive on the scene.

Journalist shows us inside her destroyed Beirut home

He owns 3 pro sports teams all currently playing in bubbles

“We can get them navigated through the health care system,” he said, a make sure they are connected to facilities that have the proper equipment to meet their needs. Sometimes, he said, a patient in need of surgery may bypass the emergency room completely and go straight into an operating room.

“It’s getting patients to care much faster,” he said.

When it comes to cardiac issues, he said, “last year we had four cases, all four are leading normal lives. Several years ago, you might see one or two people a year,” who recovered, he said.

There are challenges, he said. While local leaders have been supportive, financing is still a problem.

“The biggest thing is that EMS still tends to be an underfunded system in the United States.”

That has caused many, especially rural, systems to struggle.

Scott County, like the rest of the state has struggled to cope with a spike in heroin use.

In a relatively small community, he said, there may be multiple visits to the same family for overdose calls. “It can happen over and over again,” he said. One of the most difficult parts is trying to help people who are so deep in their disease that they can’t help themselves much less their family. “It’s traumatizing for the kids at the end of the day,” he said, “it’s a mental strain on the staff.”

The stress and trauma of COVID-19 has made already challenging health situations even more difficult.

Covington said that Remley’s leadership has helped make sure COVID-19 protocols were in place and that the community had the personal protection equipment (PPE) that was needed.

Officially, Remley retires July 31 but it will be a short rest before he moves onto his next challenge. He has about three days off before joining a private company. He will be returning to being a hands-on provider, really his favorite part of his job.

“If you take care of them and that they have a good outcome….at the end of the day when you have patients who come back in any say thank, that makes it worth it,” he said.

“I’m going to stay in the health care field, I’ll be doing critical care transport, taking care of individuals who are critically ill” who need to change facilities or get other treatments.

How frequently do you visit the farmers market?