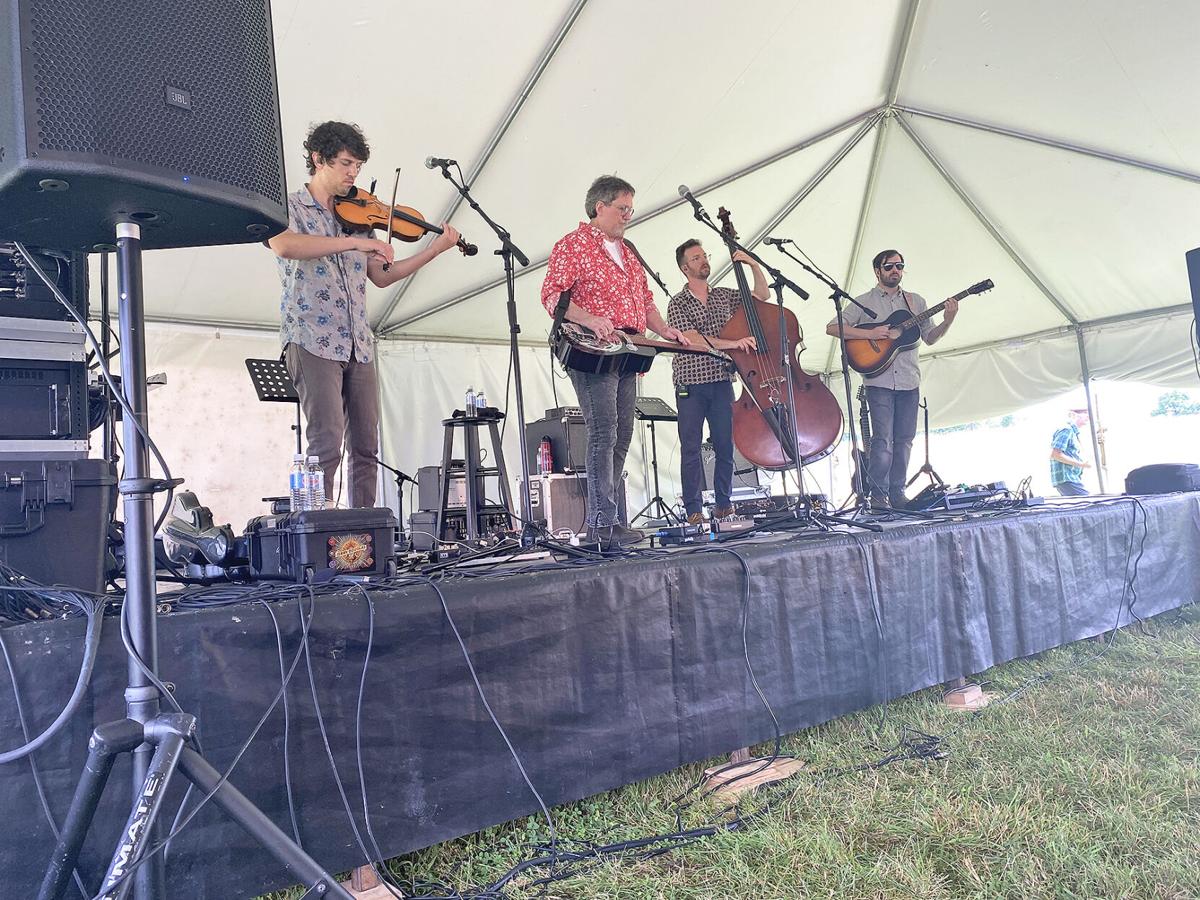 The Jerry Douglas Band played to a packed house at the Troubadour Cardome Concert Series on Sunday. 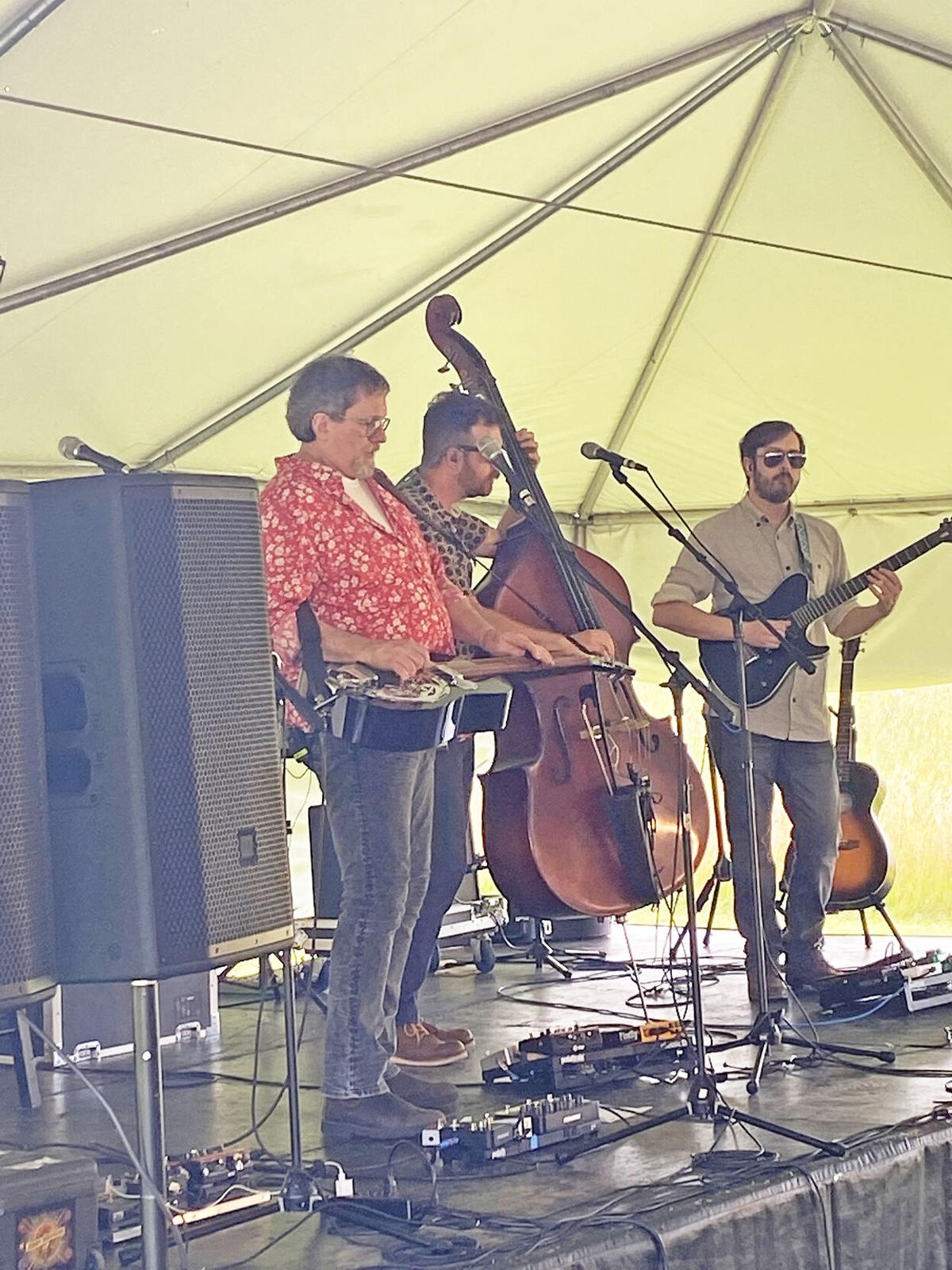 Left, Jerry Douglas is a 14-time Grammy award winner. He is well known for his work with Alison Krauss and Union Station.

The Jerry Douglas Band played to a packed house at the Troubadour Cardome Concert Series on Sunday.

Left, Jerry Douglas is a 14-time Grammy award winner. He is well known for his work with Alison Krauss and Union Station.

A packed house, roughly 500-plus, turned out Sunday afternoon for The Jerry Douglas Band.

A relaxed Douglas told the crowd it was good to be back on stage after 14 months off due to the pandemic. His band then provided at 75-minute set that was cut short by some weather moving in.

Douglas and three members of The Jerry Douglas Band — Daniel Kimbro, Mike Seal and Christian Sedelmeyer —teased each other while sharing stories with the audience that applauded at every opportunity. The set was a mix of bluegrass, country and rock.

Douglas is a 14-time Grammy award winner and is well known for his work with Alison Krauss and Union Station. He is a world-renown Dobro musician.

A few days earlier Rhonda Vincent and the Rage entertained a good Georgetown crowd, again despite some threatening weather.

The two concerts were the first among 15 Troubadour events being held at Cardome as part of an effort to encourage people to get a COVID-19 vaccine. The concerts are free to anyone with a vaccination card, but anyone wishing to attend must pre-register at www.woodsongs.com and click on the TROUBADOUR panel at the top of the http://www.troubashow.com/cardome. The requirement to have a COVID-19 test 48 hours prior to the concerts has been lifted. The concerts will be held on the grounds of Cardome beneath a giant tent holding some 500 people. Pfizer vaccines will be available onsite before each concert. Volunteers are needed to assist and can sign up via email at office@woodsongs.com. Include “Volunteer” in the subject heading, along with contact information.

The concerts will be held rain or shine.

Public response to the concert series has been very good, and local cooperation has been excellent, said officials.

“The music business has been clobbered by the pandemic,” Johnathon said. “What better way to fight the collapse of the music business with more music? This is part of what makes Kentucky so great. The community spirit is absolutely endearing. Kentucky is like the rocking chair on America’s front porch and this music is part of the soundtrack that will make Kentucky’s future a leading force.

“These artists are all coming out of the goodness of their hearts. They want to help. This series was not hard to put together because they are all my friends and we all want this ding-dang pandemic over with. These concerts are great reasons why folks should be in Georgetown this June. That’s important, we need to love our hometowns, keep them healthy and fun.”

Standing in the grand tradition of Chris Stapleton, Tyler Childers, Sturgill Simpson and Colter Wall, Arlo is packing them in at theaters across North America. This is a rare and special event.

The Appalachain hip-hop legends bring their roots based, beat driven music to Georgetown. The Bowling Green natives have a national reputation for southern-based hip-hop. Yasmin Williams is a unique guitar master who mesmerizes audiences.

The most awarded fiddle player in the history of the IBMA, infused with rocket ship energy on the heels of receiving the Grammy Award for Bluegrass Album of the Year. In concert with his band of super pickers.

Grammy Award winning blues master, king of the Delta roots tradition and Chitlin’ Circuit, winning 12 Blues Music Awards just in thrill the last few years alone. If you love real, raw, rootsy blues … don’t miss Bobby Rush! Tee Dee Young is nothing short of Kentucky’s own blues treasure, a legend in his on right as a recognized master of the Blues.

GOP report points to Wuhan lab as source of COVID

One of country musics most awarded and revered voices, In the 1990s, six of her songs were Top 10 hits, three albums were certified gold, and one album received a platinum certification. Hit records like “Souvenirs,” “Aces,” “Letting Go,” “Drive South” and more, plus tunes from her latest Merle Haggard tribute album.

One of America’s premier piano masters, selling millions of albums across the globe, especially know for the Linus and Lucy theme song for the Peanuts TV Specials. This will be a magical evening of grand instrumental mastery not to be missed.

Revered as the greatest acoustic guitarist on planet earth, his concerts leave audiences spellbound around the world. The Australian guitar master is considered the Chet Atkins of the new generation, inspiring thousands of young guitar players in his shadow. Rob Ickes is a master musician winning over a dozen IBMA Dobro Player of the Year Awards and Trey Hensley is a brilliant new generation guitar player. Bring your seat belts for this one!

The legacy of Bill Monroe lives in the strings of Sam Bush’s mandolin, one of Kentucky’s music icons, founding member of the superstar group, New Grass Revival and revered as the Father of NewGrass. Sam puts on a high energy explosion of musical power.

Kentucky’s own iconic superstars, members of the Kentucky Music Hall of Fame and among Country music top hit makes. They ignited their career with the global smash “I Want To Kiss You All Over” followed by a huge list of top country hit records.

Andy is one of the most brilliant acoustic guitar players in North America, Ben has changed the way musicians approach the cello. This is two separate concert performance in one night. One ticket, one night, one stage, two artists for an evening of mind bending musicianship.

An evening with some of the finest and most successful writers in Kentucky. A string quartet will play between each literary artist who will read from their many great works. Presented by Georgetown College and the Carnegie Center for Literacy, Bobby Ann Mason is a premier novelist with books like “In Country” and her memoir was nominated for the Pulitzer Prize. Silas House works have been lauded by the New York Times and his books include the much praised “Clays Quilt.”

In January, Gov. Beshear presented Johnathon with the Milner Award for his efforts in the arts, nationwide and in Kentucky. Other Milner Award winners include Wendell Berry, Jesse Stewart and Jean Ritchie. In addition to creating the WoodSongs Old-Time Radio hour, Johnathon has produced multiple albums and books. Most recently, his screenplay, “Caney Creek: The Legend of Alice Lloyd,” was optioned for production as a motion picture.

Do you think the Georgetown city clerk position should be an appointed position?