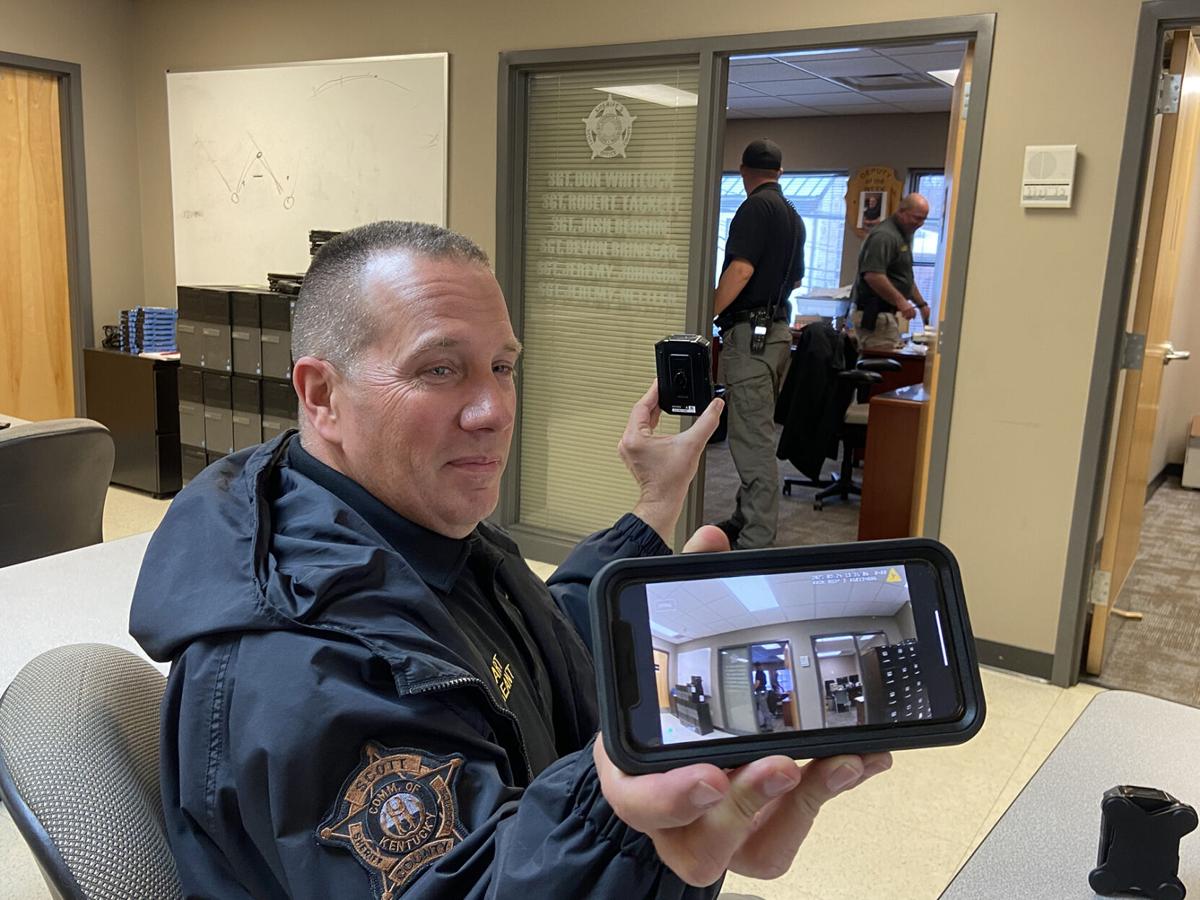 Sgt. Eddie Hart shows off the live video feature of the new Axon body cameras obtained by the Scott County Sheriff’s Office earlier this month. The fiscal court approved the five-year contract for approximately $500,000 in January to purchase 50 body cameras for all full-time deputies. The cameras must be on when interacting with citizens on work-related matters. 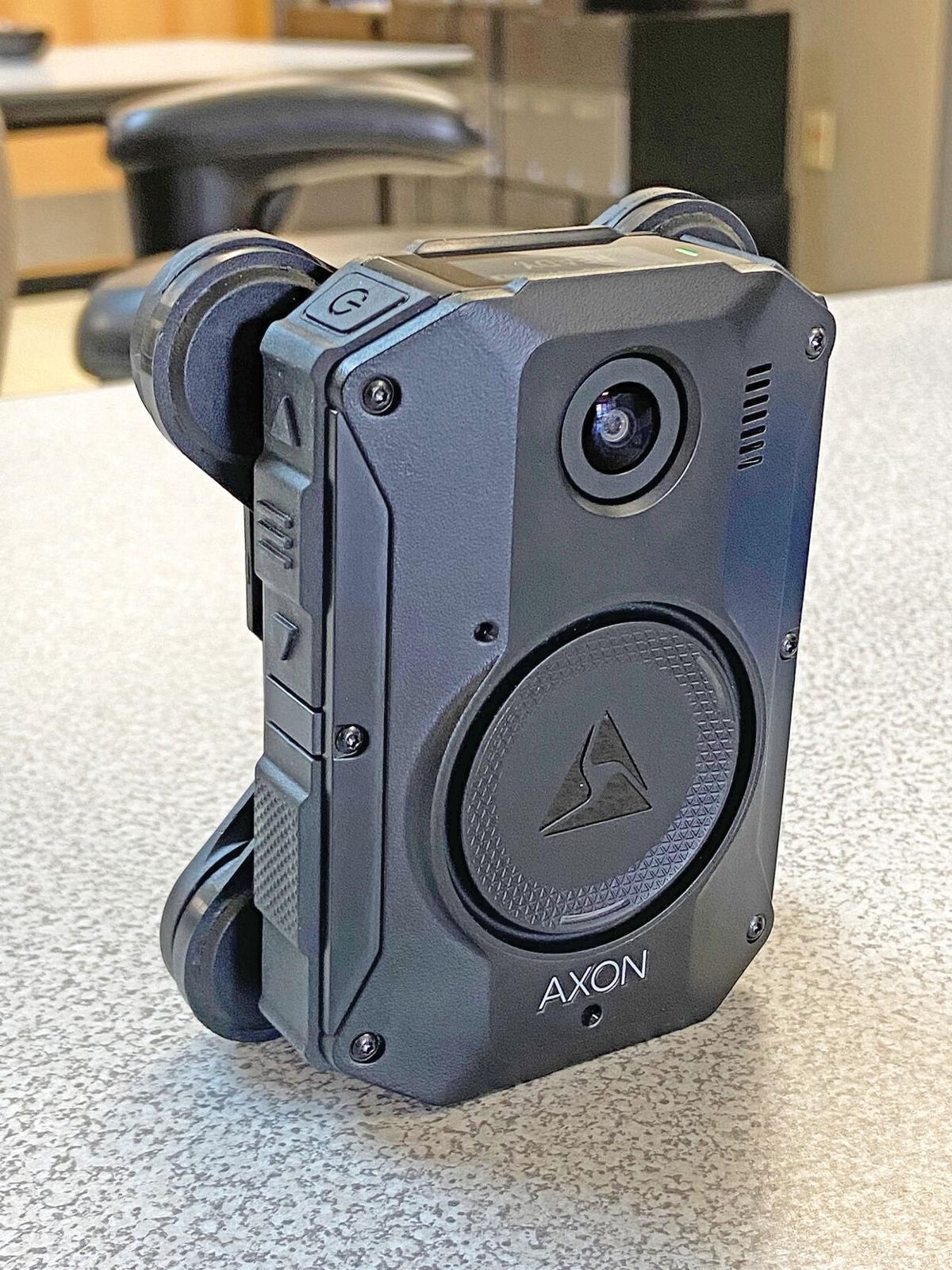 The camera can be attached to the officers body with different attachments that allow them to work with a variety of police wear.

Sgt. Eddie Hart shows off the live video feature of the new Axon body cameras obtained by the Scott County Sheriff’s Office earlier this month. The fiscal court approved the five-year contract for approximately $500,000 in January to purchase 50 body cameras for all full-time deputies. The cameras must be on when interacting with citizens on work-related matters.

The camera can be attached to the officers body with different attachments that allow them to work with a variety of police wear.

Scott County Sheriff’s Office currently has all of its full-time deputies equipped with body cameras after they were approved by the fiscal court earlier this year.

But this didn’t happen overnight. Sheriff Tony Hampton said his office has been looking into cameras for the last two years.

“We’ve done a lot of research on the body cameras and we’ve been looking at this for about two years, but we started getting serious about them about a year ago,” he said. “We tried three different brands. We felt it (Axon) was the best quality and had the best options for us.”

Hampton added that the department’s reasoning behind the cameras was for total transparency.

“The biggest reason for getting them is we wanted to show that we’re a completely transparent agency,” he said. “I also feel like it provides a level of safety and protection for my deputies. Overall, we felt like it was time to make this move.”

“As a supervisor, we can go and review how our officers respond,” he said. “It’s part of our policy. We have to review officer video weekly. So randomly, they’ll just go and grab segments of video, they’ll review it, they’ll make sure officers are following policy, they’ll see how their attitude is with the general public, and as a supervisor see if there’s ways to do things better.”

When it comes to the public, however, Hart said its up to the department to show this transparency given how much the community has invested in the project.

“The public’s making a substantial investment on this,” he said. “This is their $500,000 that’s paying for this. So they’re doing it also to hold us accountable, to see transparency. When there’s an issue that comes up that there’s question on, when we can, we’ll release video as quickly as possible so they can see that.”

But before the cameras could be enforced for deputies, Hart said the office had to create several policies.

“We had to create not only policy for the cameras, by doing that we went to five or six other agencies and looked at what their policies were and modified them for what we wanted to do, but you also have to look at policies that come to discipline, come to retention of evidence,” Hart said.

Part of this policy includes officers having their cameras on when having any work-related contact with the public.

“The policy that we have states that deputies will turn it on with any contact they have with a citizen,” Hart said. “So, when someone walks up and starts to have a conversation that is work-related, they will then activate it.”

The cameras can be attached to the officers body through various different attachments, including both a magnet and screw-in mechanism, that allow them to work with a variety of different police wear. Officers are encouraged to wear them up on their shoulders or lower on their bodies rather than in the middle so that the video can be visible at all times, Hart said.

One of the most useful features of the Axon camera is one that allows supervisors to see what happens 30 seconds prior to a video being turned on, Hart said.

Popcorn salad recipe brings the internet to its knees

Cardiologist on Floyd: Repositioning him would've saved his life

“It (the camera) has a 30-second window meaning that once they press on, it actually pulls back 30 seconds worth of video,” he said. “Now, the first 30 seconds doesn’t have audio, but it will show up what led to the officer pressing the button to turn it on.”

Video footage can also be viewed live by either the officer using the camera or by a supervisor, as long as the camera is turned on. Hart said this could be useful for officers in high-risk situations as they can use the camera to look around corners or see around obstructed views, and it allows supervisors to see the status of a situation firsthand.

The policy also dictates that all deputies upload their footage to the cloud at the end of their shift, which can be done either in the police cruisers or at the station. The footage will be uploaded to a computer, which then stores the video the sheriff’s office cloud network to keep it safe in the event the computer system crashes, Hart said.

There’s also several phone apps associated with the cameras that benefit officers, including one called Axon Aware, which includes a map feature that shows where officers are located at all times when their cameras are attached. There’s also an activation system tied to the officers taser and gun holsters, which will cause them to automatically activate if they are drew.

“Our holsters and tasers were outfitted with a device that if someone draws their handgun, it automatically turns this on so the officer doesn’t have to,” Hart said. “So, if I had five cameras in this room and someone drew their gun, all five cameras would start to record. The other thing is anyone that’s got this app on their phone with the sheriff’s office, it will alert us that a gun has been pulled. Therefore, even people not involved with the situation, before they even get on the radio to send for additional officers, they’ll know.”

Hart added that a representative will be coming in to outfit police cruisers with similar technology that will automatically activate cameras in the event that emergency lights are turned on.

The body cameras just began being used two weeks ago and required several weeks of training prior to being implemented, Hart said.

“We had everybody go through a three-hour initial training,” he said. “A week before that, they went through an hour-long training over policy. Basically, reinforcing to them all the times that they have to use it. We went over policy, then we went over training on actual use, training on how to use the apps on your phone. So now, we’re in the phase of learning.”

“We’re going to hold them accountable, but we also understand this is a learning process,” he said. “We are in training. When you’re getting out on a stressful situation, in our job, we’re focused to look at people, stay focused on them for threats, check their hands for weapons, and the last thing we’re used to right now is reaching down and activating a camera. So, we’ve got to get them into that process of doing it before they arrived on scene, but it will happen.”

One of the largest expenses of the project was the video storage in the cloud. But Hart said the office plans to keep all video on file until the matter has been handled in court. Because of the cloud storage, the video is all easily accessible to officers and supervisors.

Hampton said he is pleased with the project’s implementation thus far and that cameras are likely in Scott County to stay.

“I’m glad we were able to get this project done,” Hampton said. “It took (more than) a year, it took a lot of research by my guys, it took the help of our judge-executive and magistrates to get the funding. We’re glad to have them and hope they’re a great tool for us and help us all across the board.”

Kyle Woosley can be reached at kwoosley@news-graphic.com.

Do you feel safe in Scott County?