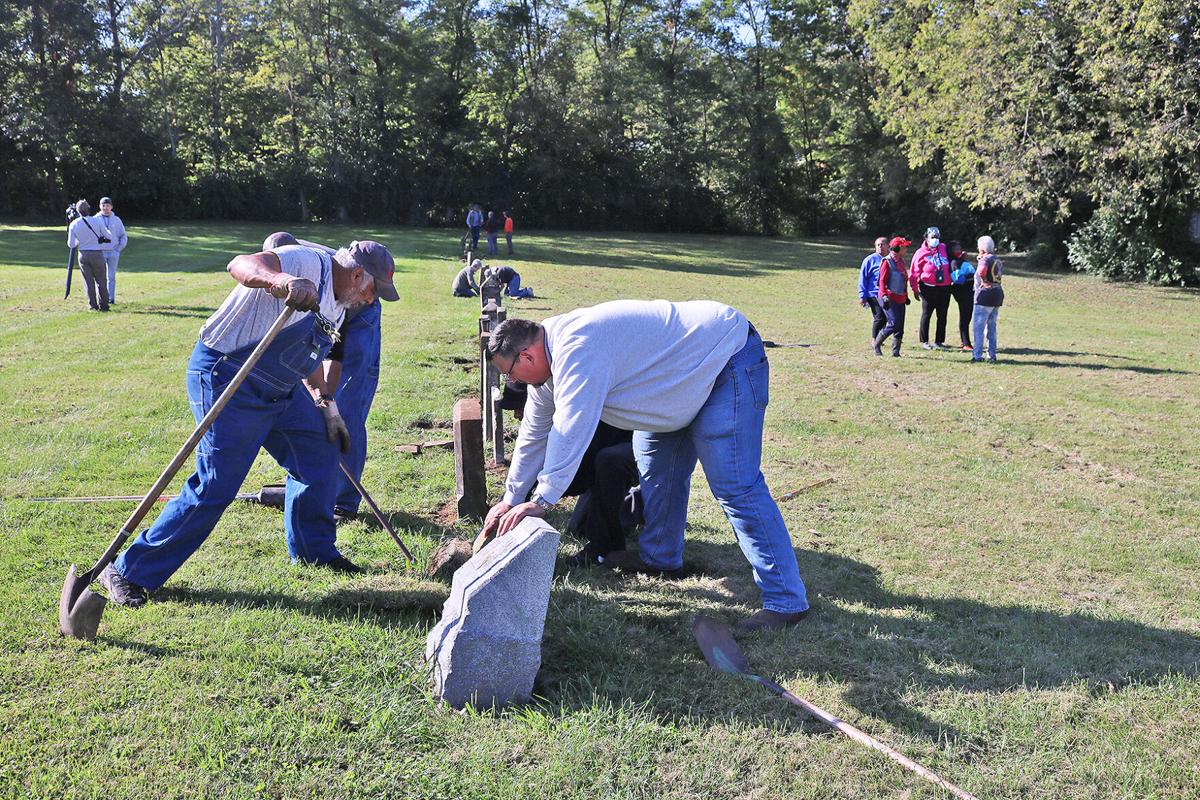 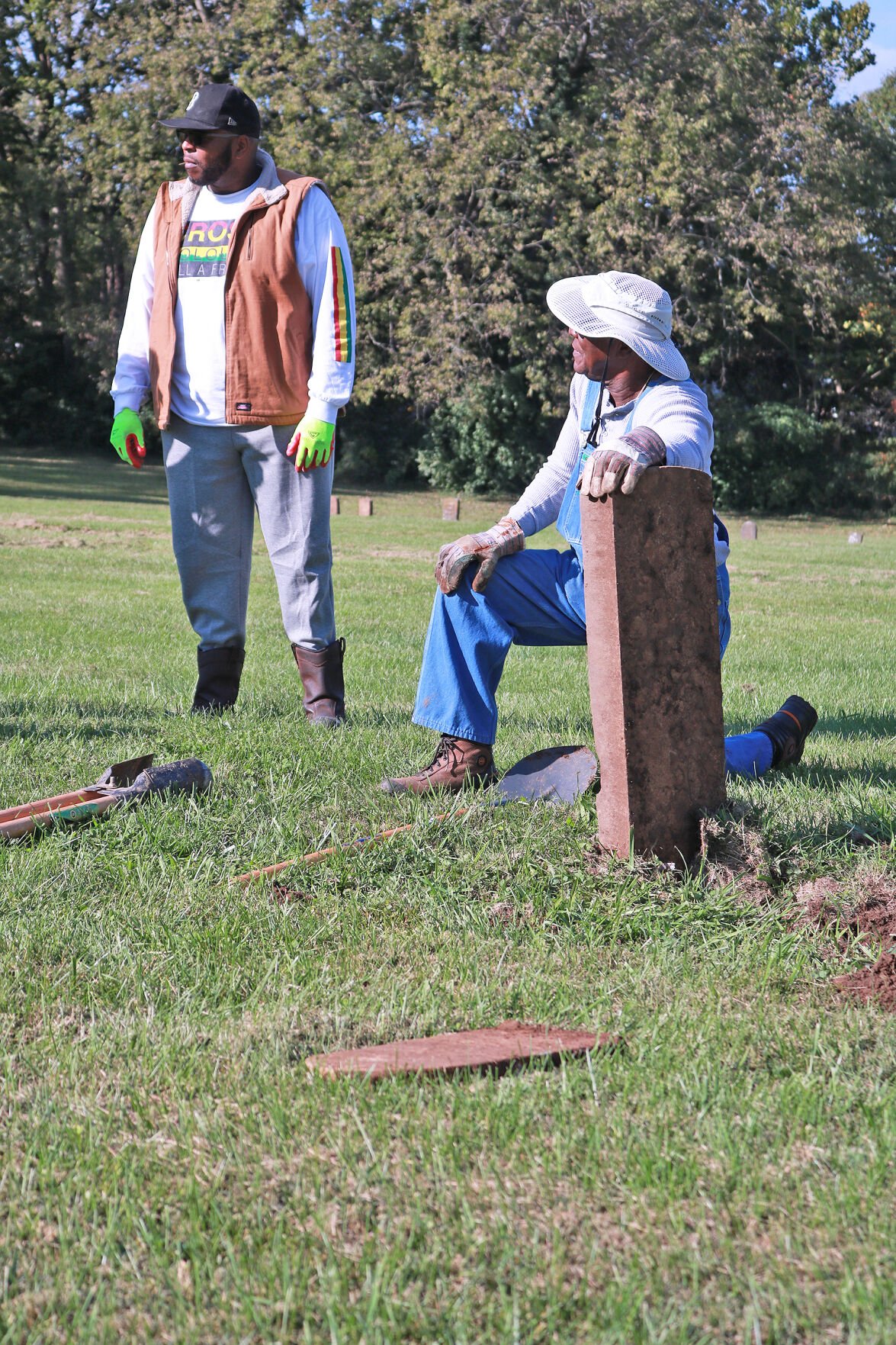 Volunteers work to clean up the Old Georgetown Cemetery. Ronnie Sidney kneels at the grave of a Buffalo Soldier.

Volunteers work to clean up the Old Georgetown Cemetery. Ronnie Sidney kneels at the grave of a Buffalo Soldier.

The Old Georgetown Cemetery sits off North Hamilton Street. Terry Thomas, a local historian, credits the cemetery as the first cemetery in Georgetown, once known as Lebanon.

Walking most of the grounds, headstones from hundreds of years ago can barely be seen through the grass that has taken over.

Since 2018, people from the Boston area, University of Kentucky students, and local leaders have been working to restore as much of the graveyard as possible. Saturday, people from all over the community gathered to help continue the clean up by digging up old headstones and setting them upright.

Thomas mentioned that the headstone of Albert Generals was the first they uncovered three years ago when the project started.

Tim Turner has been a Georgetown resident since 1997, he said, but he didn’t know the cemetery existed until the project started. As someone who wanted to help,  Turner linked up with Thomas and University of Kentucky School of Anthropology.

Students have already spent time researching the graveyard and helped clean up  starting in 2018, but plans continue for more work to be done.

UK plans to bring in a drone, he said.

“It’s all for a class project and it’s not costing the city anything,” Turner said. “They’re pretty passionate about it — UK and the students are. We’ve met some students from all over the country.”

No one knows what happened or why the cemetery became so unkept.

Councilman Todd Stone recalls conversations with his father about what may have happened.

“(My dad said) ‘I don’t know,” Stone recalled. “My dad when he was 15 or 16 years old, this church (that sits in front of the cemetery) was a grocery store. Well, he worked there. And I asked him, he said, ‘I remember going to work there and seeing this just full of headstones.’”

Records of the Old Georgetown Cemetery are hard to find and few exist, Thomas and Vinegar agreed.

“Remember, the court house had two fires,” said Kimberly Vinegar. “We have looked and looked, and we’re still searching (for records).”

They said they believe the records may have burned in one of the fires.

“Might want to think the records was tore up, burnt, whatever they done with them — destroyed — when they turned them over to the black folk,” said Thomas. “But, this is Georgetown’s first city public cemetery.”

“Because there is a congress in here,” Vinegar chimed in. “Most people think this was a black cemetery — No — It was mixed. I was told by an old lady — my father even told me — he said, ‘Kim, there’s even Indians in here.”

MLB has first player lockout in over 20 years

Thomas calls it a pioneer cemetery.

“That’s why this is so important, you know, to let everybody know the history of this place.”

Four Buffalo Soldiers are buried in the Old Georgetown Cemetery, they said.

Those working hard to restore the cemetery want it to get the recognition it deserves.

“The city moved out headstones in the mid-90s,” said Jeffrey Norman in a News-Graphic report from 2018.“We’re trying to find out what was done with the headstones,” Norman said.

Norman also pointed out that the Old Georgetown Cemetery can’t be found online in the same report.

Kitty Dougoud, a Georgetown resident who works at the Kentucky Heritage Council, described Old Georgetown Cemetery as “a very important part of our history,” back in 2018.

Dougoud also noted that as part of the effort to restore the cemetery, local landscape-care operator and state Rep. Phillip Pratt has agreed to donate and place pink dogwood trees at the cemetery’s North Hamilton Street entrance, the News-Graphic previously reported.

Thomas also plans to plant a dogwood every year, he said.

“I want this to be pretty and blooming.”

Getting a flag pole, historic markers and benches are also on the list to beautify the old cemetery.

“We got ideas for some things we’re going to do,” Thomas said. “But, that’s what we want. We just want (the Old Georgetown Cemetery) to be recognized as being what it is.”

Vinegar said the restoration is out of respect for those in the cemetery.

“Gone, but not forgotten. (That) is what this graveyard is.”

Do you support a Cigar and Bourbon Bar potentially opening in the county?